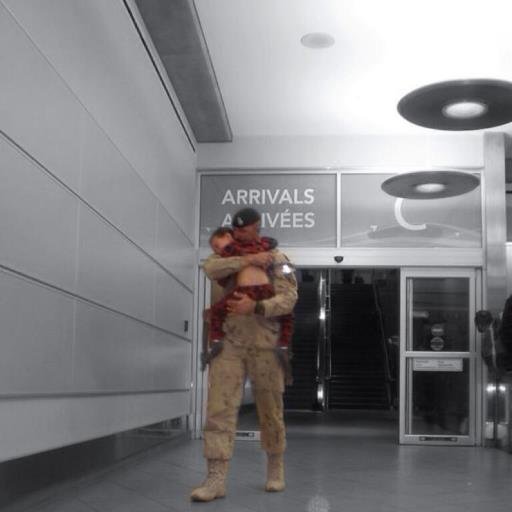 My friend Craig Silverson is a Canadian veteran of Afghanistan and a brother in the faith. I admire his courage. You can follow Craig on Twitter at @CraigSilverson.

We reached our objective shortly after 1100 hrs and dismounted from our vehicle.

We proceeded on foot.

Moral was good and that’s always a bonus.

Everything seemed familiar. Nothing that we hadn’t already done before. Routine. This would change in a fraction of a second.

With tremendous speed, a streak appeared overhead. Immediately I felt tension in my chest and all sound was removed. I braced for the concussion. Nothing. They say you never hear the one that gets you. I knew I was alive.

I quickly looked around to assess the situation.

My wife and kids appeared fine, however, their smiles had turned into faces filled with fear and bewilderment. I was at the mall. A sizable skylight had been the window to an aircraft landing at the City Centre Airport. Immediately the army of people engaged in their holiday shopping came into focus. The grip on my chest was still present. Fight or flight!

It was time to go home.

I returned from Afghanistan in 2010 and everything appeared to be normal.

Connecting with family and loved ones was welcomed. Mission complete! I was now eager to begin my four and a half weeks of post deployment leave.

I had big plans. Number one on the list was not shaving!

Midway through my leave I grew restless and felt isolated. Although I was at home with my family, I felt alone. I was unable to connect and became anxious to return to duty.

My first day back to battalion did not start off well. We were informed about the passing of one of the members from our unit. All sound was removed. Our fallen brother had taken his own life.

We felt the concussion.

He was only in his early twenties.

He had problems with addictions in the past. Sadly, he had submitted to his battle with depression.

Post-traumatic Stress Disorder had just knocked on all of our doors!

As an Infantry soldier, learning to hide things becomes an inherent part of your job. This would also include injuries, both the visible and invisible.

My first sleepless night wasn’t that bad – when it exceeded nearly twenty days consecutively, this raised some concern.

Night sweats, high readiness, guilt and fear where just some of the issues.

Any minute of shut eye I could muster was quickly raided by nightmares! During the day wasn’t much better. My interaction with people became limited and this included my own family. Going to my unit had it’s challenges too. I spent the majority of the day camouflaging my emotions. I became the ultimate grey man. Marking time.

Eventually my anxiety had made me it’s POW (Prisoner of War).

This opened up the door for some false support. I found myself at the base medical building seeking treatment for various physical ailments. Exhausted.  Completely, mentally rundown. I had lost forty pounds and developed a strain of pneumonia in my left lung. This left me on bed rest for two months and with the perfect excuse not to be seen. However, this would make matters worse.

The next wave of emotion soon hit.

Actually it was more like a full on tsunami.

An attempt for control by a soldier deconstructing.

To be continued…Read Part 2 here.