TBA am Meet in the departure hall at Calgary & TBA Edmonton airport to check in for the TBA Air Canada flight to Toronto arriving at TBA. Leave Toronto at 5:15pm on the nonstop, overnight, Air Canada flight from Toronto to Tel Aviv, meals served on board.

Arrive in Tel Aviv at 12:50Pm meet your tour guide. Drive north through the Sharon Plain, along the Mediterranean coast as you journey towards Galilee. Stop at Caesarea the largest port in the Mediterranean built by King Herod the Great, later the Roman capital. Here Pontius Pilate had his seat; Cornelius lived and was baptized (Acts 10); Paul embarked to Tarsus (Acts 9:30) and Philip preached (Acts 8:40). Visit the Roman Theatre, King Herod’s palace, the Hippodrome and the Crusader City.

Day 3 Tuesday March 29 TO THE GALILEE

Travel via the Jezreel Valley to Megiddo, one of King Solomon’s fortified city kingdoms (1 Kings 9:15; 10:26) – with impressive ruins of 21 layers of civilization, where the book of Revelation will come to life at the site of the epic Armageddon. Stop at Yardenit for Baptism in the Jordan River. Enjoy a fish lunch. Then following the tradition of the “fishermen” disciples, sail on the Sea of Galilee with time for meditation and prayer. Visit the famous ancient boat from the time of Jesus at Gennasareth (Ginnosar).

Get an early start. Visit the Mt Beatitudes where Jesus delivered the famous “Sermon on the Mount” (Matt.5). Travel North through the Jordan Valley to Dan, to visit the lush Nature Reserve with impressive ancient city gates from Abraham and King Jeroboam’s times. Continue to Banias to visit Caesarea Philippi, the Northern extent of Jesus’ Ministry, where Jesus asked, “Who do men say I am?” Drive onto the Golan Heights then visit sites central to Jesus’ Ministry – Starting at Kfar Nahum (Capernaum) center of Jesus’ Ministry in the Galilee and site of many of his miracles (Mark 2:4; Matt.8:5; 9). See the remains of St Peter’s (mother in law’s) home and the ancient synagogue where Jesus taught and worshipped (Mark 1:21; Luke 4:31). Continue to the Church of the Primacy of Peter (Tabgha) on the shore of the Sea of Galilee (Breakfast & dinner)

Get an early start, travel south along the Jordan Valley to the Sheikh Hussein Bridge and cross into Jordan. Emulating the children of Israel and Moses, stop on Mt. Nebo for a glimpse of the Promised Land. Travel through the Moab Mountains, stop to visit the intimidating ruins of the desert fortress at Mukawir, Machaerus from Jesus’ day, where Herod Antipas held, then killed, John the Baptist. Continue south along the “Kingsway,” time permitting – stop at little Petra en route to Petra.

Start the day walking and riding into Petra – The Red Rock. Centre of the ancient Nabatean people and one of the seven wonders of the ancient world. See the stunning charm of the Necropolis and the many magnificent sandstone edifices. Midafternoon leave Petra travelling south on the Kings Way via Ras El Naqeb and cross into Israel at the Arava terminal. Travel through the Arava wilderness to the Dead Sea the lowest place on earth (417 meters below sea level). Due to Sabbath some rooms might only be available after dinner.

Day 7 Friday April 2 THE BOTTOM OF THE WORLD

Travel North through the stark Judean wilderness along the shore of the Dead Sea, stop at the Southern alter with time for reflection and prayer. Continue north to visit Masada – ruins of King Herod’s formidable mountaintop fortress, later the last stronghold of the Jewish revolt against Rome (73 A.C.E.). Ascend and descend by cable car. Spend the remainder of the day at leisure with time to enjoy the spa facilities at the hotel and float in the Dead Sea ~ you cannot sink!

View Ein Gedi oasis where David fled the wrath of King Saul as you travel North to visit Qumran, where a Bedouin shepherd discovered the Dead Sea scrolls in a nearby cave. Continue through the Judean wilderness and enter Jerusalem as Jesus did via Mt. Scopus. Stop to recite a Psalm of ascent with your first view of the Holy City and the Temple Mt from the Mt. of Olives. Follow in the footsteps of Jesus and the Galileans walk down the hillside, on the route of Palm Sunday, via Dominus Flevit to Gethsemane. Visit the Church of All Nations, with time for reflection and prayer in the adjacent Olive orchard. Continue to Mt. Zion to visit the upper room – site of the last supper, then St. Peter in Gallicantu, to see the steps that Jesus might have walked on. End the day at the Garden Tomb, remember the resurrection, with time for reflection and worship with Holy Communion.

Start the day in David’s City visiting Hezekiah’s or the Canaanite Tunnel and the Pool of Siloam. Then visit the Southern Wall Archaeological Park to see the impressive excavations along the South Western Wall of the Temple Mount, and stand on the very same ancient steps that Jesus and the disciples might have used 2000 years ago, to enter and exit the House of God. Proceed to the Western Wall (Kotel), then walk back in time under the city, through the Western Wall Tunnel Excavations. Stop at the pools of Bethsaida where Jesus healed the paralytic man and enjoy the acoustics at the adjacent St Anne’s church. Continue to the Israel Museum, to visit the Shrine of the Book, home of the Dead Sea scrolls and the Model of Ancient Jerusalem, describing the city from the Second Temple Period, the time of Jesus.

Start the day at Yad Vashem – national memorial and Museum of the Shoah where you pay tribute to the six million Jewish victims of the Holocaust in Europe during the Second World War. Walk through the colourful Suk (markets). Stop at the Monastery of the sisters of Zion to visit the Lithostrotos, perhaps the very place where Jesus was tormented and disrobed by Roman soldiers. Then visit the Church of the Holy Sepulchre. Continue into the Jewish quarter view archaeological windows into the past from the first and second temple periods in the Roman/Byzantine/Crusader main street, called the “Cardo” and stop at the Broad Wall (Isaiah). Visit the Temple Mt Institute to see replicas of the instruments used in worship on the Temple.

Spend a day of leisure in this fascinating city. Revisit places of interest and do some shopping in the colourful “Suk” (Market Place) in the Old City. Options to consider ON YOUR OWN modest entrance fees might be required: Spend time at Succat Hallel the Jerusalem House of Prayer. Visit: The Citadel Museum (David’s Tower); Ramparts (walls) of the Old City; Rockefeller Museum; Augusta Victoria; the Anglican and Lutheran churches or the Mahane Yehuda market. Enjoy a farewell dinner in the hotel, then meet for debriefing. (Breakfast & dinner)

HOTELS AS LISTED OR SIMILAR 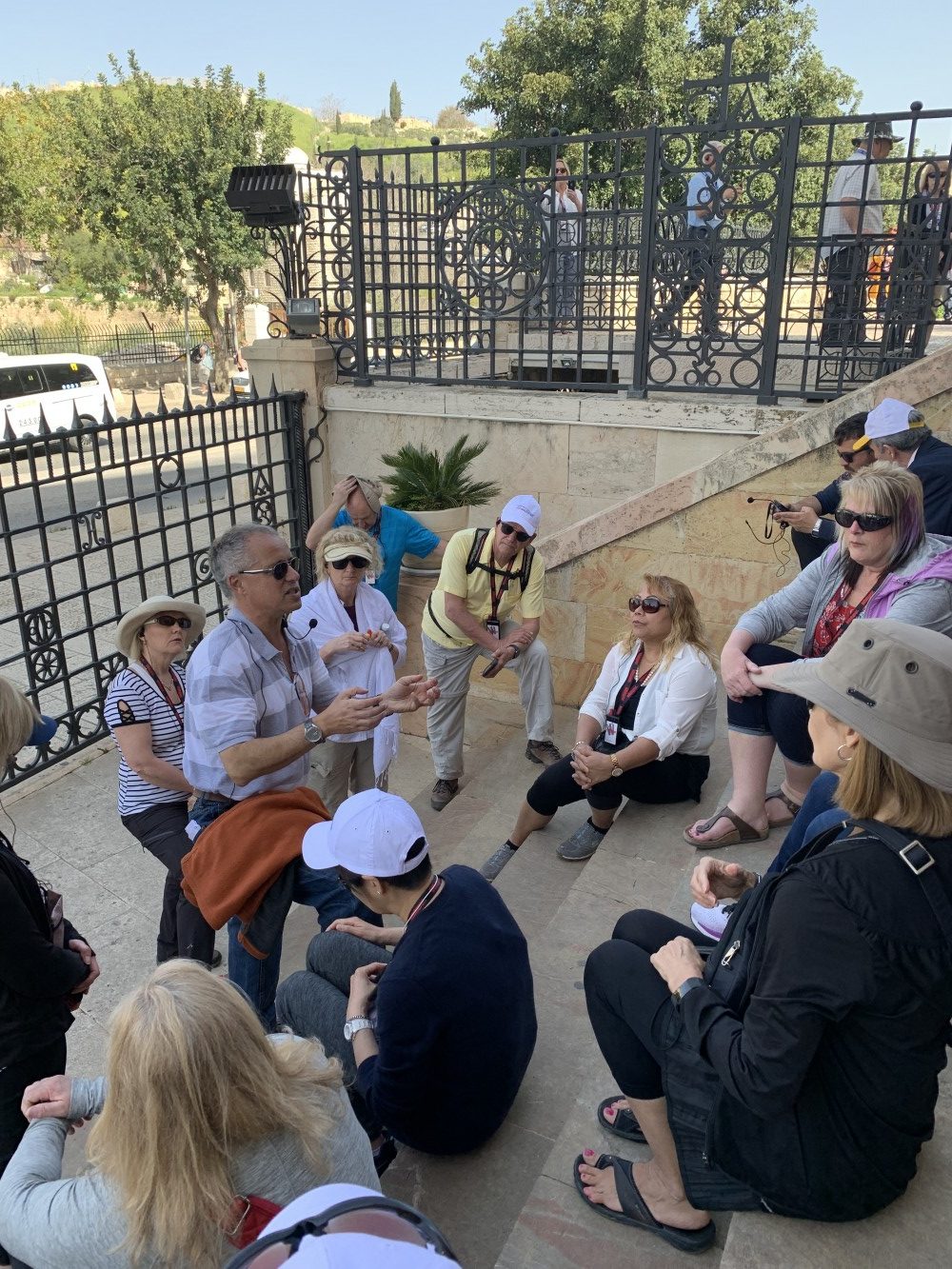