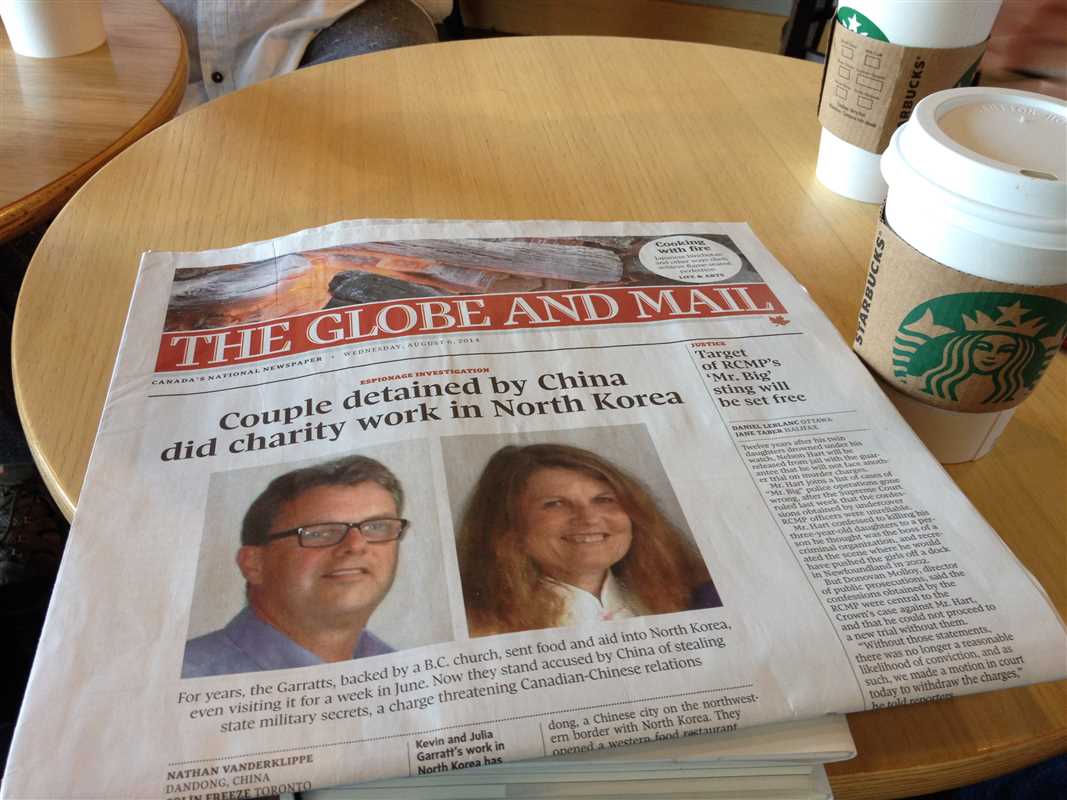 Its not everyday your friends make headlines.

I wasn’t expecting to see Kevin and Julia Garratt on the front page of the Globe and Mail newspaper…or any newspaper for that matter.

But there they were.

Never did I think that they would be making International news. (See update below)

Not that what they’ve committed their life to isn’t news worthy.

I first met them in Dorval, Quebec. A mutual friend introduced us. Kevin and Julia shared their passion of moving to China and raising their family there.

That was thirty years ago.

A Coffee Shop in China

April 2014 was the last I heard from them. Julia was teaching courses at a University. They were owners of a coffee shop. Their days were occupied with serving Key Lime Pie Smoothies and assorted brews of coffee. Kinda mundane if not for their location – on the border of China and North Korea. Peter’s Coffee Shop.

They were connected with a humanitarian aid foundation focused on North Korea. In April they talked about transporting soy milk, kimchi and seedlings into North Korea. They had already shipped 40,000 seedlings and were wanting to send more.

When the Garratt children were young they lived in Haikou, on Hainan island. Kevin knew I was a Coke collector. When he came home to Canada he would bring me Coca-Cola memorabilia from China which I have on my office shelf.

Kevin and Julia love the Chinese and Korean peoples. They always spoke respectfully of the privilege and pleasure of residing in China.

They were arrested on August 4th, while out to dinner with friends. The charges are very serious in nature.

China’s official Xinhua News Agency has reported that the couple are being investigated by the state security bureau on “suspicion of stealing state secrets about the country’s military and national defense research.”

There’s lots of speculation about the reason for their arrest. Now’s not the time for speculation, but intercession and intervention.

China allowed a Canadian consular officer to meet the couple within 48 hours of their detention earlier this week. Rather than being charged with wrongdoing they have been placed under “residential surveillance” while an investigation proceeds. They can be held this way for up to six months before a formal arrest is made, providing a potential opening for China to change its mind. See the full Globe and Mail update here.

Two days after their arrest Kevin and Julia were able to tell their children that they weren’t under physical duress. Simeon, their oldest son, said, “They just wanted everybody to know that they’re safe. They are being kept in a guest house under constant guard. Physically they’re fine, but they’re really, at this point, just very frustrated and confused and are just hoping that the Chinese government is able to see the truth.”

APPLICATION: Remember the Garratts – Kevin and Julia, their son Peter in China, and Simeon, Sarah and Hannah in Canada.