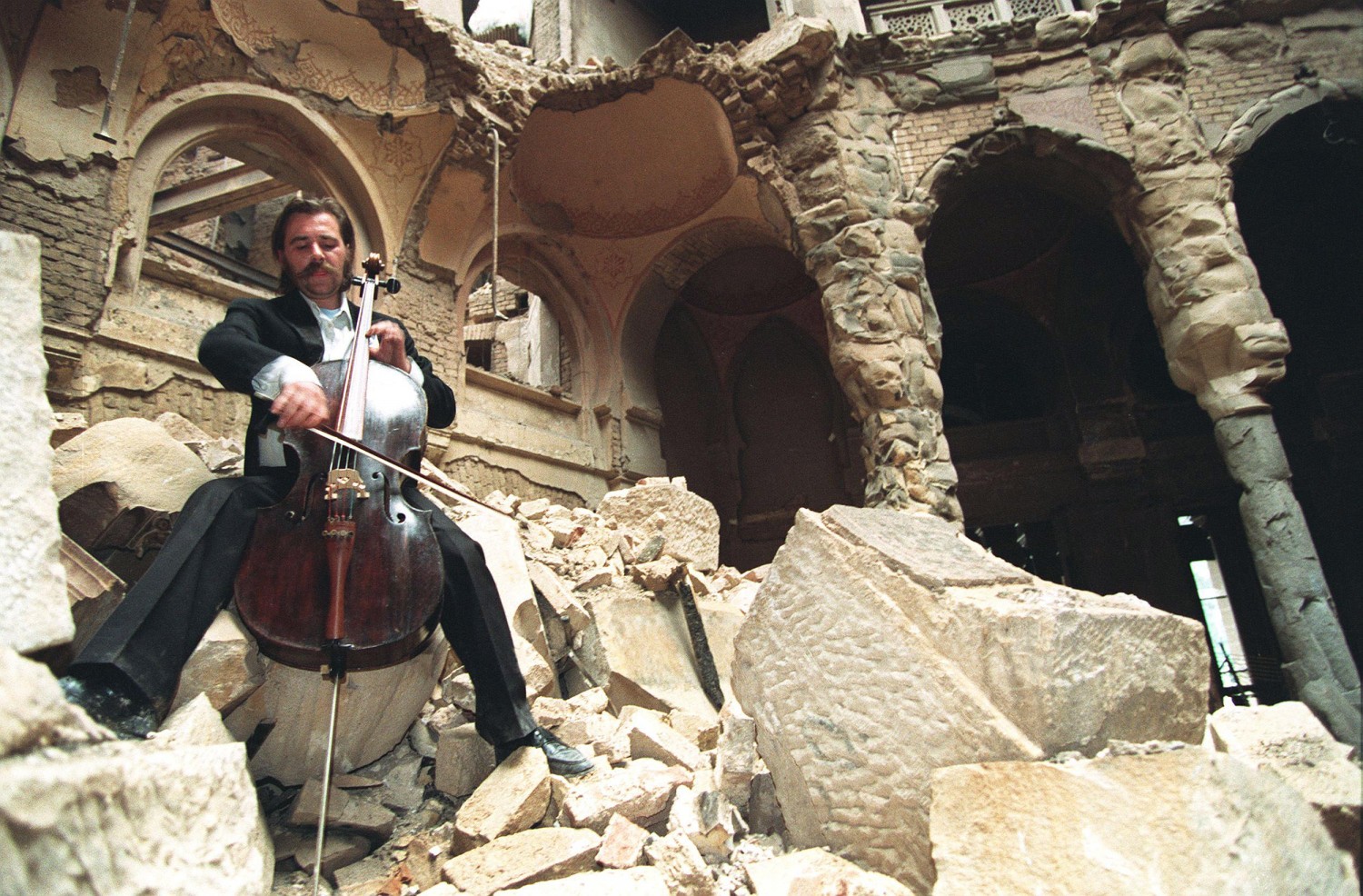 What To Do When You Don’t Know What To Do

The queue had stretched out of the Bosnian bakery and onto the street. Starving, war-shattered survivors were lining up for their daily bread. It was 4pm, May 27th, 1992 – one month into the siege of Sarajevo. Suddenly a mortar shell fell directly into the middle of the bread line, obliterating 22 lives.

A hundred yards away lived a 37-year-old man – Vedran Smajlovic. Before the war he had been the principal cellist of the Sarajevo Opera Company. When he saw the massacre outside his window, he rushed to the scene and was overcome with grief at the carnage.

Driven by anguish, he decided to take action.

He did the only thing he could do.

He made beautiful music.

For the next 22 days, one for each victim of the bombing, at 4 p.m. precisely, Mr. Smajlovic would put on his full formal concert attire, and walk out of his apartment into the midst of the battle raging around him.

He placed a fire-scorched stool in the middle of the bomb-crater and played Albinoni’s Adagio in G Minor.

When this vigil ended he played in graveyards and at funerals. In acts of fearless defiance bordering on madness, Mr. Smajlovic, beautifully dressed, braved sniper fire, to play for the dead and dying.

Smajlovic decided to challenge the ugliness of war with his only weapon – music.  He offered a vision of beauty to his city and to the soldiers trying to destroy it. 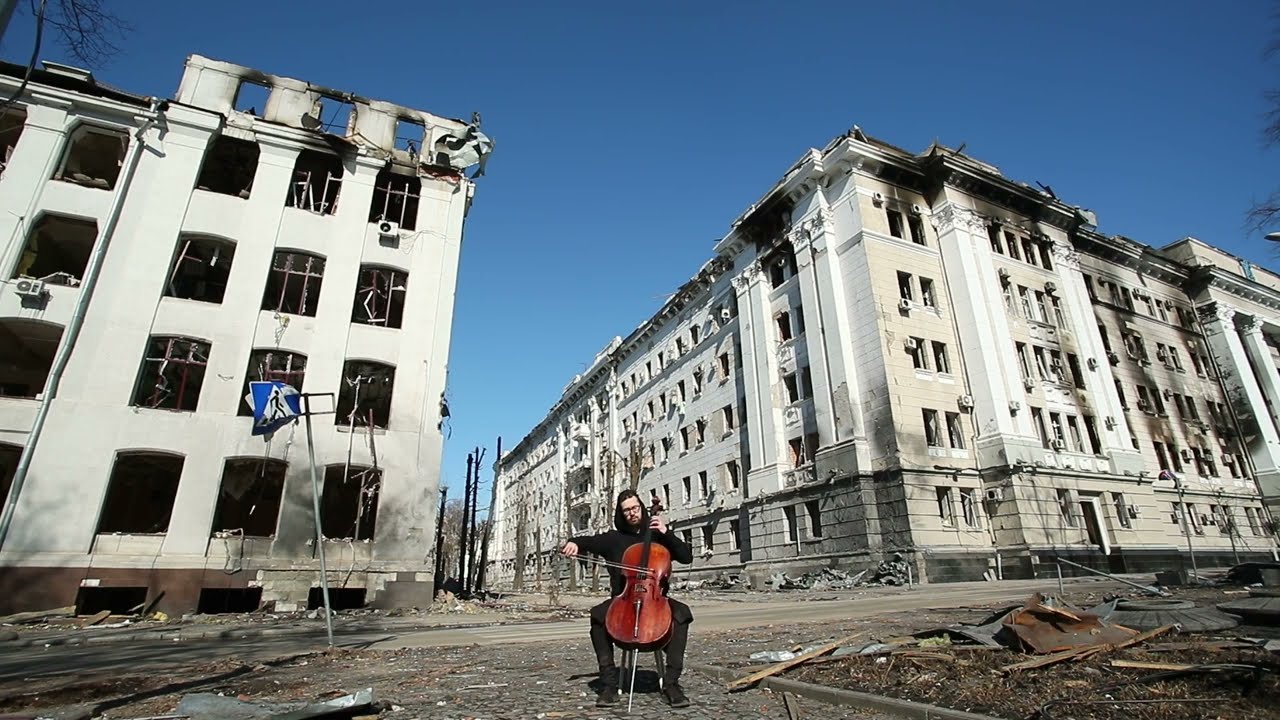 Denys Karachevtsev has played his cello in some of the most prestigious concert halls in Austria, Japan and Turkey and even in Tunisia’s ancient amphitheater, El Jem. Now he is playing in the ruins of his Ukrainian hometown, Kharkiv.

Mr. Karachevtsev performed Bach’s somber Cello Suite No. 5 in the center of a deserted street strewn with the debris. His backdrop: the regional police headquarters, its windows blown out by Russian shelling.

What to Do? Worship as Defiance

So, what do you do when your health or family or business is under siege? When fear and despair are like deadly sniper fire, what’s your next move?

Is choosing to worship any less heroic than Verdan Smajlovic’s cello playing?

When you settle your fire-scorched stool in the middle of your ugly circumstances and give thanks to God, you are, like Smajlovic, or Karachevtsev performing an act of fearless defiance.

Reverently lifting your hands to a loving God who hasn’t yet shown his hand in making things better for you, is a prophetic demonstration of hope.

I’m not suggesting this sounds sane, however I’ve responded this way myself – and watched others as well; a recently widowed young woman for example. Her husband was diagnosed with inoperable cancer. His death left her grief stricken. Yet, on the Sundays to follow, she worshipped the Lord, with hands lifted up. It was good for her soul and for the souls who worshiped with her. Today, she is happy in an unexpected 2nd marriage.

3 Things Worship Will Do for You

1. Worship is what you need to do when its all you can do. Think of Job. When all of his children were killed and his wealth was destroyed in one day, what could he do? He worshiped. (Job 1:20)  Outnumbered by an enemy alliance, a King of Israel admitted, “We don’t know what to do but our eyes are upon you.” (2 Chronicles 20:12)

2. Worship reminds you that, ultimately, your battles are not yours but God’s.  The enemy armies turned on each other, leaving no one alive and four days worth of plunder to collect. Coincidence? (2 Chronicles 20:15) The army of Israel was instructed to sing as their warfare, “Give thanks to the Lord for His love endures forever.”

3. Worship settles your soul by defying your despair. “Have faith in the Lord and you will be upheld..stand firm and see.” (2 Chronicles 2:20) Worship is not passive. Worship is a sacred act of defiance.

Worship will lift a siege from your faith and create an oasis of hope for your soul.

Have you used worship as warfare? Please leave a comment below. Thank you.