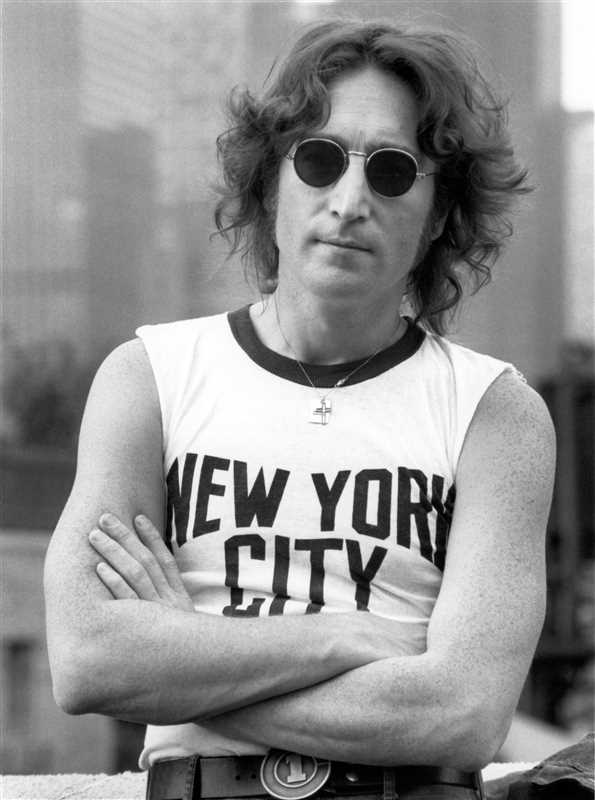 John Lennon, the “smart Beatle,” is considered one of the biggest influences on culture of the past century. He was on a search for meaning.

In 1966 the Beatles took Shea Stadium by storm and their impact spread like a tsunami across North America.

Ironically, at the same time youth looked to the Beatles for meaning in life, they were desperately searching for life’s meaning. 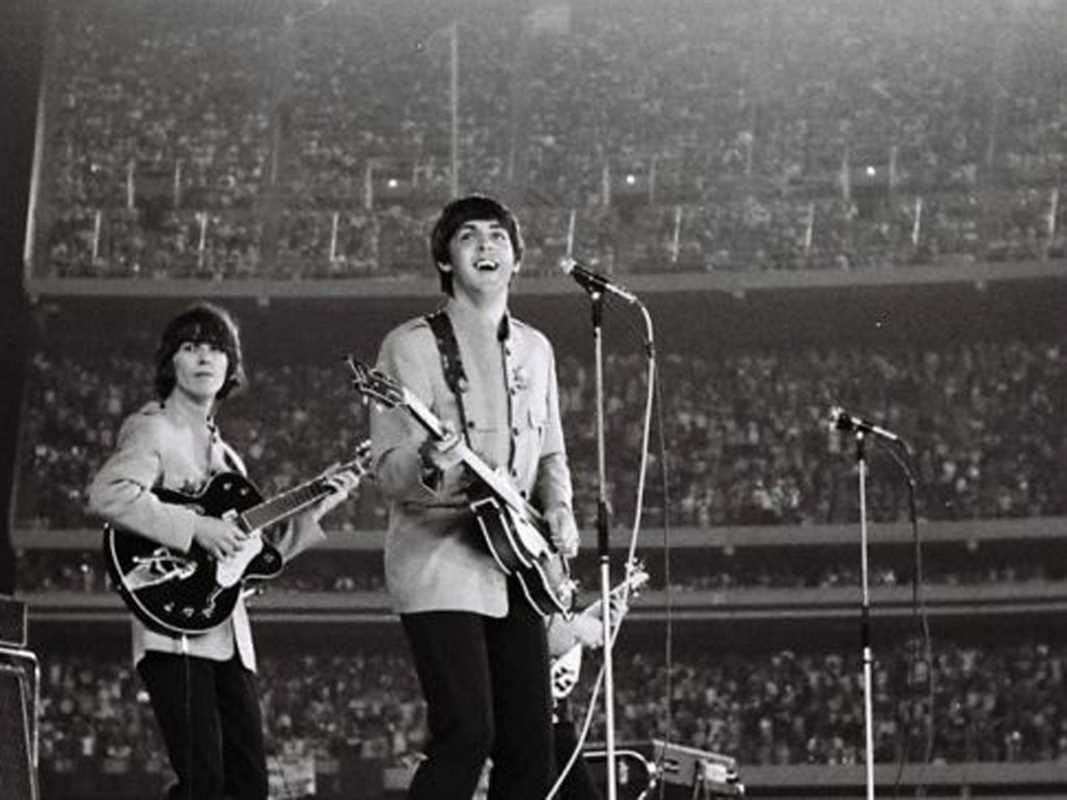 At the age of five, Lennon’s father was away at sea often, and his mother moved in with another man. His father made him choose between his mother or him. Lennon first choose his dad but when his mum walked away he ran after her. She would shortly leave him with her sister.

Lennon chased acceptance for the rest of his life. 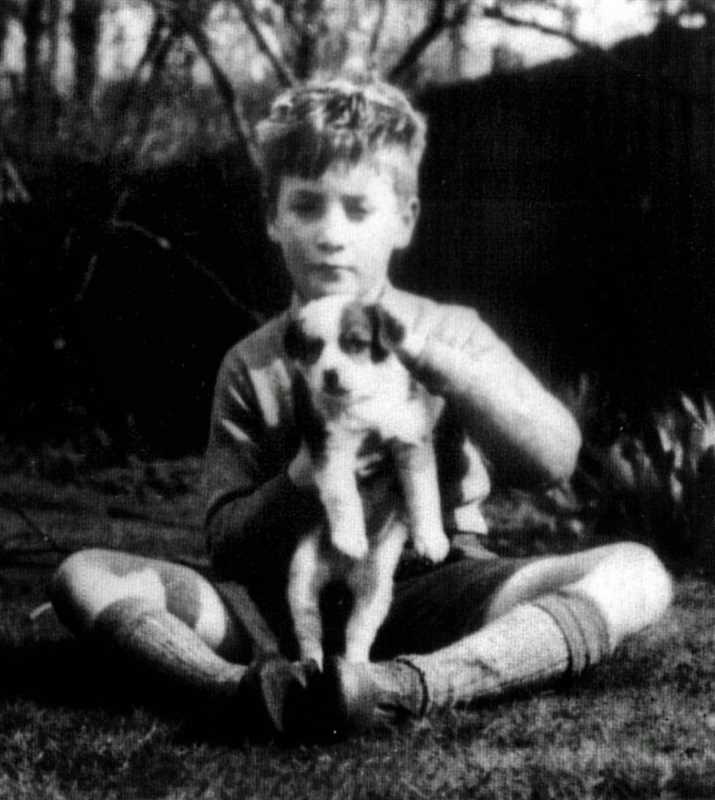 At the age of 15, his mother was killed in car accident.

“After my mother’s death, I was sort of in a blind rage for two years. I was either drunk or fighting. There was something the matter with me. I cried a lot about not having parents and it was torture. I started on pills since 17. I’ve always needed a drug to survive.”

In 1961 Lennon wrote, “God is a concept by which we measure our pain.” The lyric actually says more about Lennon than about God because John was far more familiar with pain than piety.

“When Help! came out in 1965, I was actually crying out for help. I didn’t realize it at the time. Now I may be very positive, but I also go through deep depressions where I would like to jump out the window, you know.”

The song, “Yesterday” was on the same album. Lennon may not have written it, but he lived the lyrics. 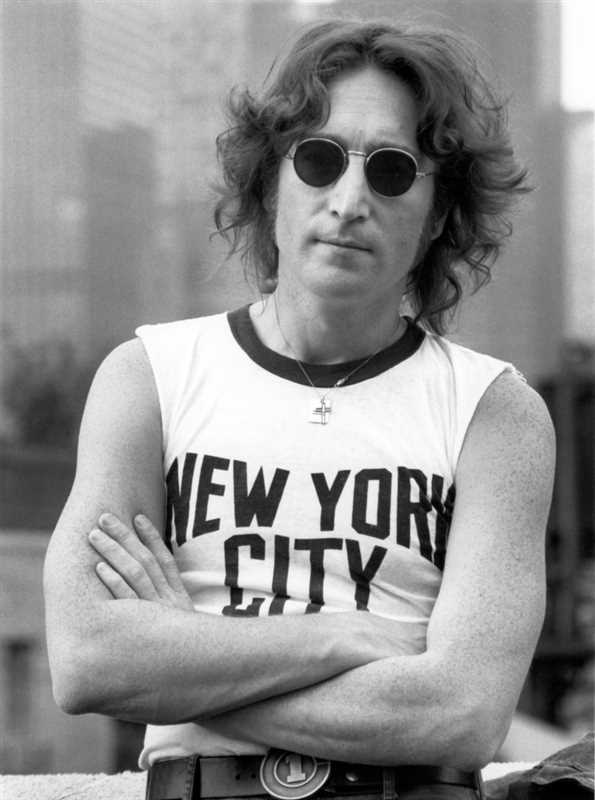 The life and teachings of Jesus had always intrigued John. When asked to nominate his heroes for the cover of Sgt. Pepper, John included Jesus, but it was eventually decided not to use this image because it was just too controversial. When John and Paul were still teenagers, they started work on a play, “about Jesus Christ coming back to earth as an ordinary person.”

It was Lennon in March 1966 who was recorded as saying, “Christianity will go. We’re more popular than Jesus now.”

Because it was hard for John to be out in public, he spent a lot of time watching TV and in particular some of America’s best-known evangelists—Pat Robertson, Billy Graham, Jim Bakker, and Oral Roberts. In 1972 he had written a letter to Roberts confessing his dependence on drugs and his fear of facing up to “the problems of life.”

“The point is this, I want happiness. I don’t want to keep on with drugs. Explain to me what Christianity can do for me. Can He love me? I want out of hell.”

Oral Roberts replied, “You said, John, that you take drugs because reality frightens you. Remember as you open your life to Jesus, He will take all the fear away and give you peace. Peace that passes all understanding.” 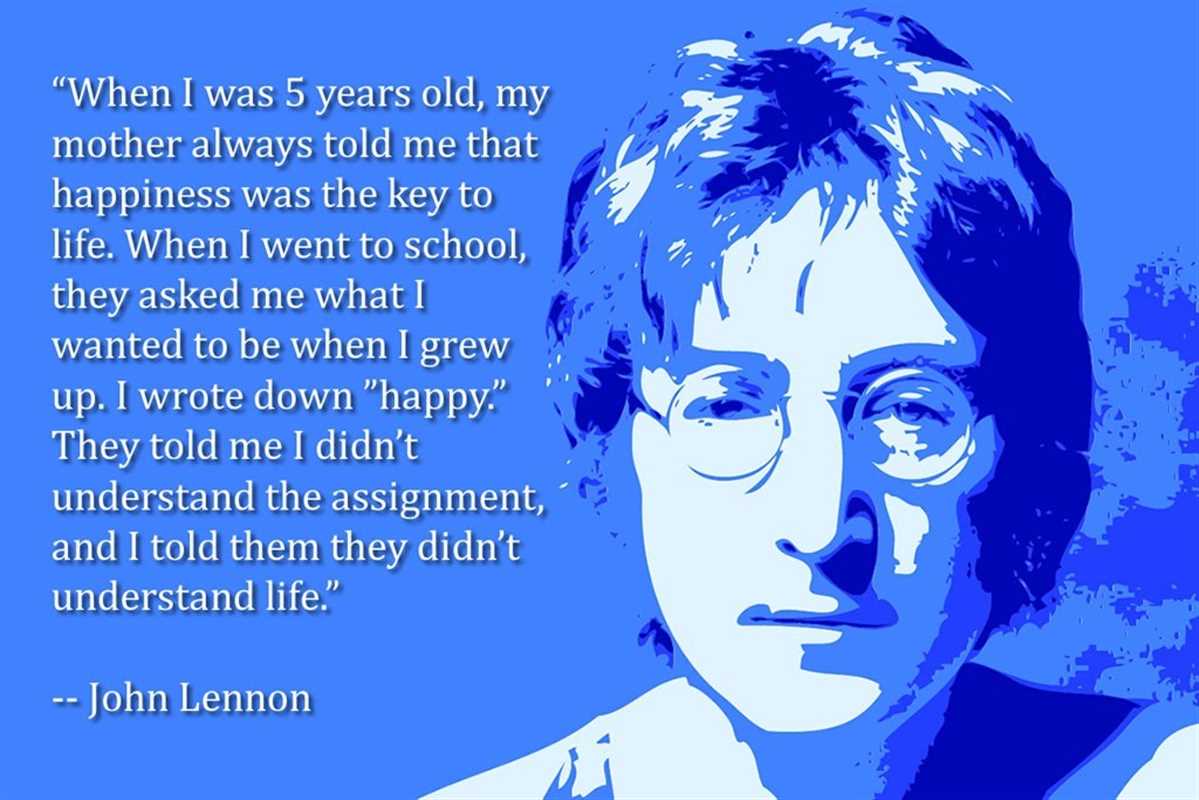 This correspondence and his exposure to TV evangelism didn’t appear to have any effect until he suddenly announced to close friends in the spring of 1977 that he’d become a born-again Christian. He had been particularly moved by the U.S. television premiere of Franco Zeffirelli’s Jesus of Nazareth, starring Robert Powell as Jesus, which NBC showed in two three-hour segments on Palm Sunday, April 3, 1977.

A week later, on Easter Sunday, he took his wife, Yoko and son, Sean to a local church service.

Over the following months he baffled those close to him by constantly praising “the Lord,” writing Christian songs with titles like “Talking with Jesus” and “Amen” (the Lord’s Prayer set to music), and trying to convert nonbelievers. 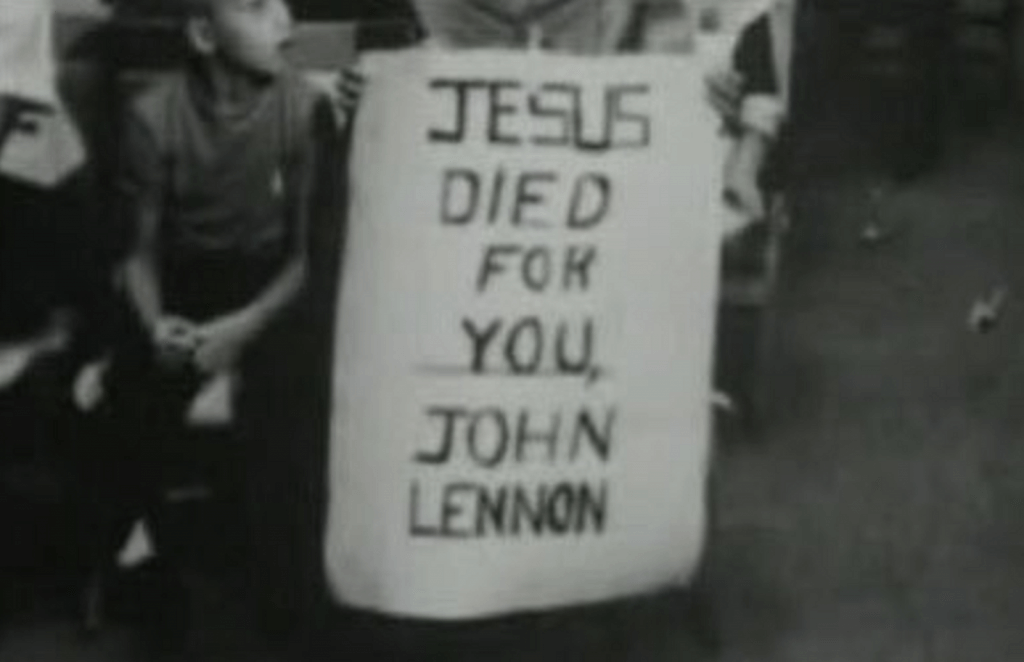 You Saved My Soul

The change in his life upset Yoko. She divorced her last husband because he became a Christian.

Yoko tried to talk John out of his faith. They met with a couple of missionaries whom Yoko questioned fiercely about the divinity of Christ, knowing that this was the teaching that John had always found the most difficult to accept.

Their answers didn’t satisfy her, and John began to waver in his faith. 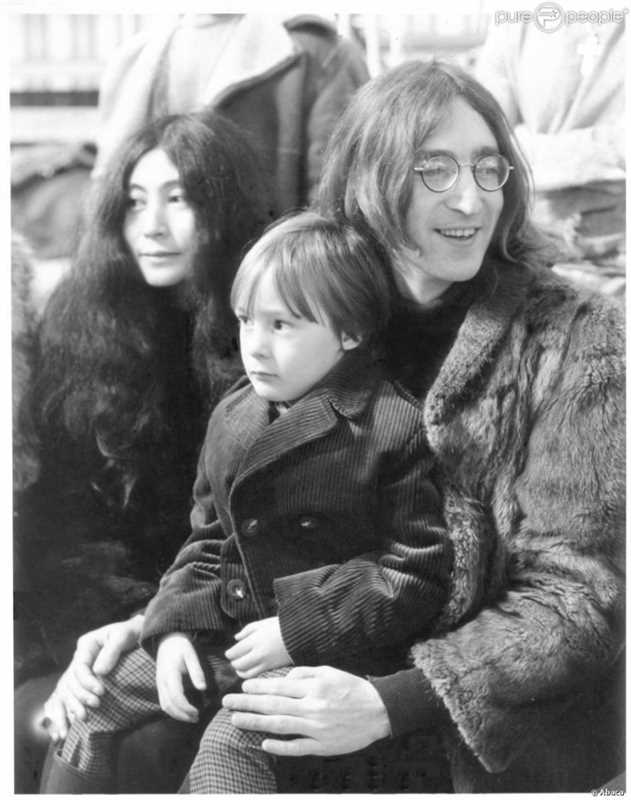 Later, Lennon would write, You Saved My Soul in which he said that he “nearly fell for the TV preacher,” but that Yoko “saved me from that suicide.” The title refers to being saved from God, not by God.

After that decision his life spun out of his control. He worried about his health and his eyesight, about making the right investments with his money, about his personal safety. By 1979, at age 39, “John Lennon was already an old man haunted by his past and frightened by the future.” (Geoffery Giuliano, “Revolver” p. 177)

He swung radically “from snappy impatience to bouts of uncontrolled weeping” and could only sleep with the aid of narcotics.

On December 8, 1980 he was murdered outside his NY apartment. 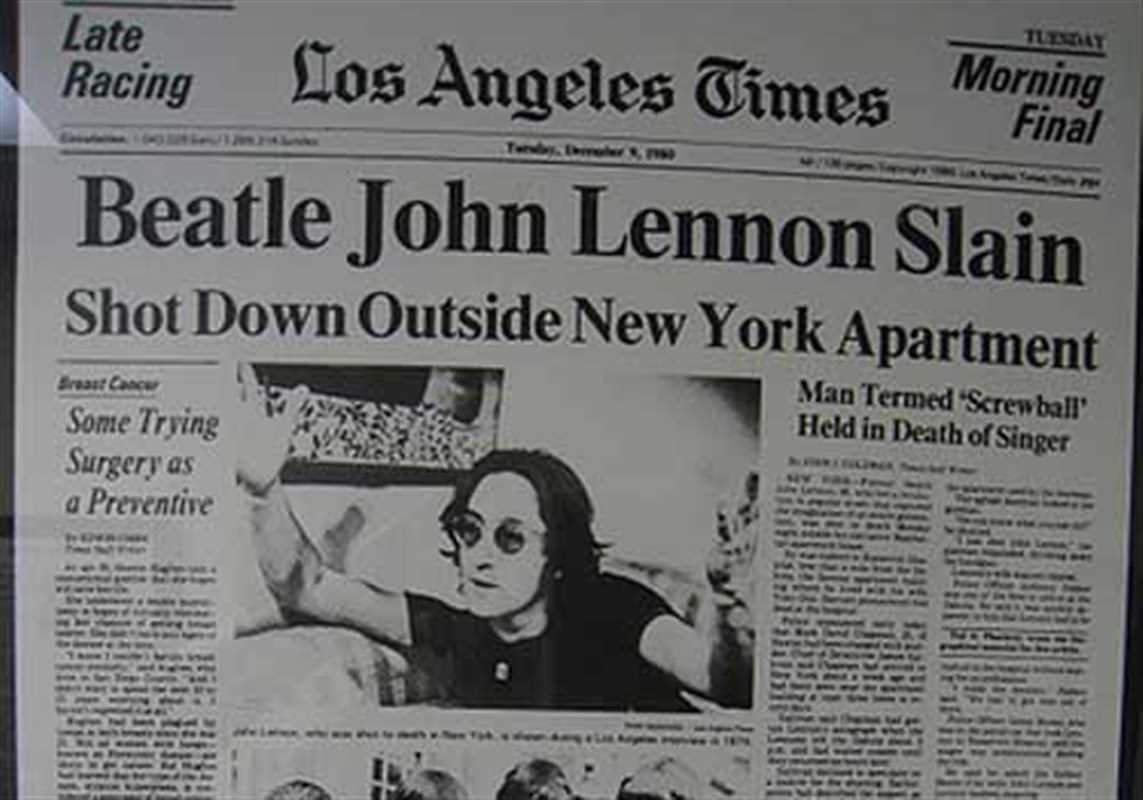 There are four fab gospels. The  fourth gospel, John’s, states, “These are written that you may believe that Jesus is the Christ, the Son of God, and that by believing you may have life in his name.” John 20:31 (NIV)

The Gospel is “good news.” It can also be “bad news.” The Gospel is the most offensive thing anybody would want to hear. It tells you that you need Jesus in order to have life and eternal life.

Yes John Lennon, God knew your pain. The Gospel is where anyone can find peace, purpose and happiness.

Jesus opened the eyes of the blind, cured diseases that dollars and doctors could not, walked on water, calmed storms with his commands and fed thousands with a few loaves of bread.

The one miracle he refused to do was to deliver himself from the Cross.

Jesus’ death and resurrection means Christianity isn’t going anywhere, but it will take you where you need to go.

Easter, according to John, means life and life worth living.