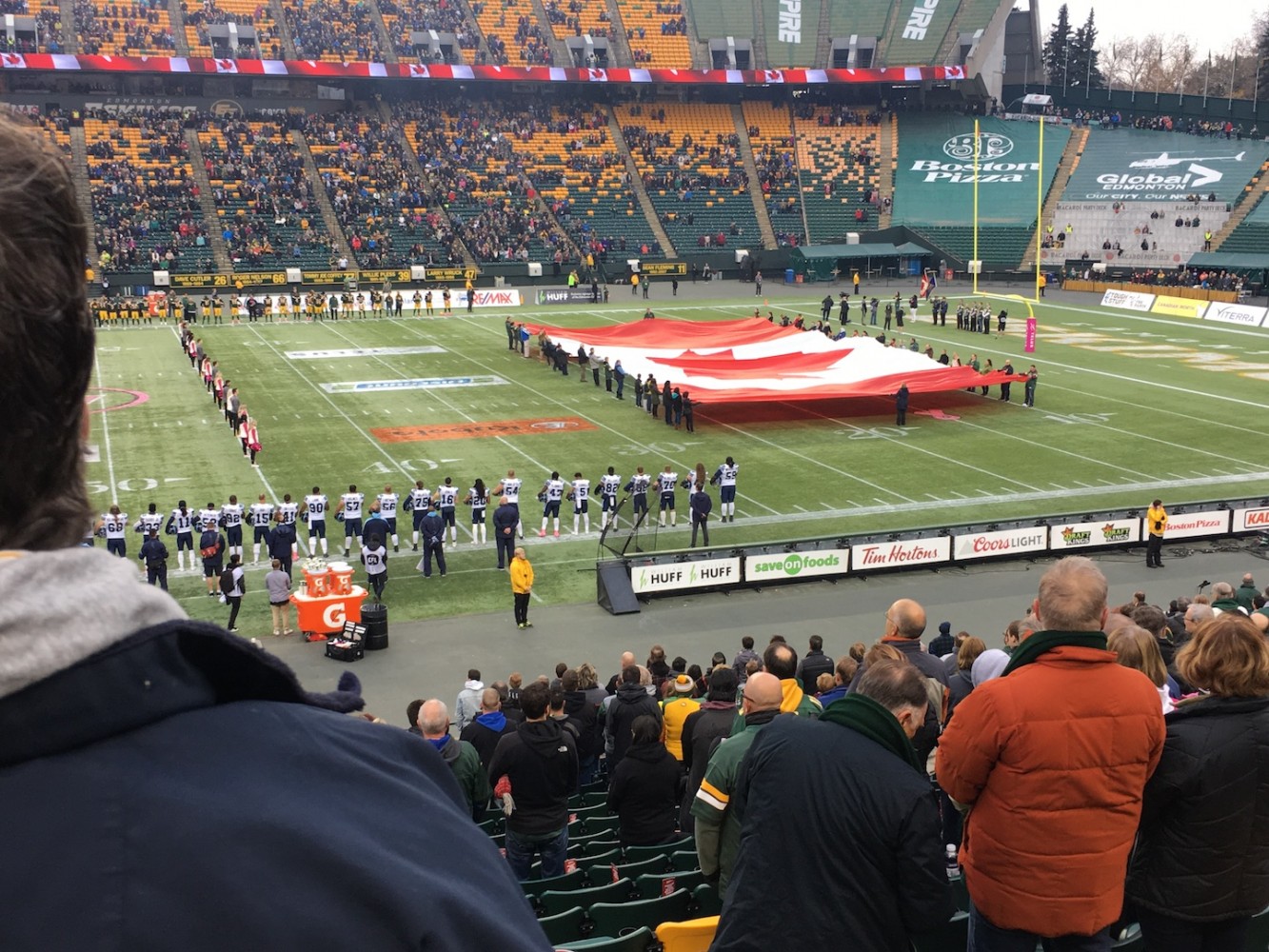 OUR SMALL ACTS OF DEFYING FEAR 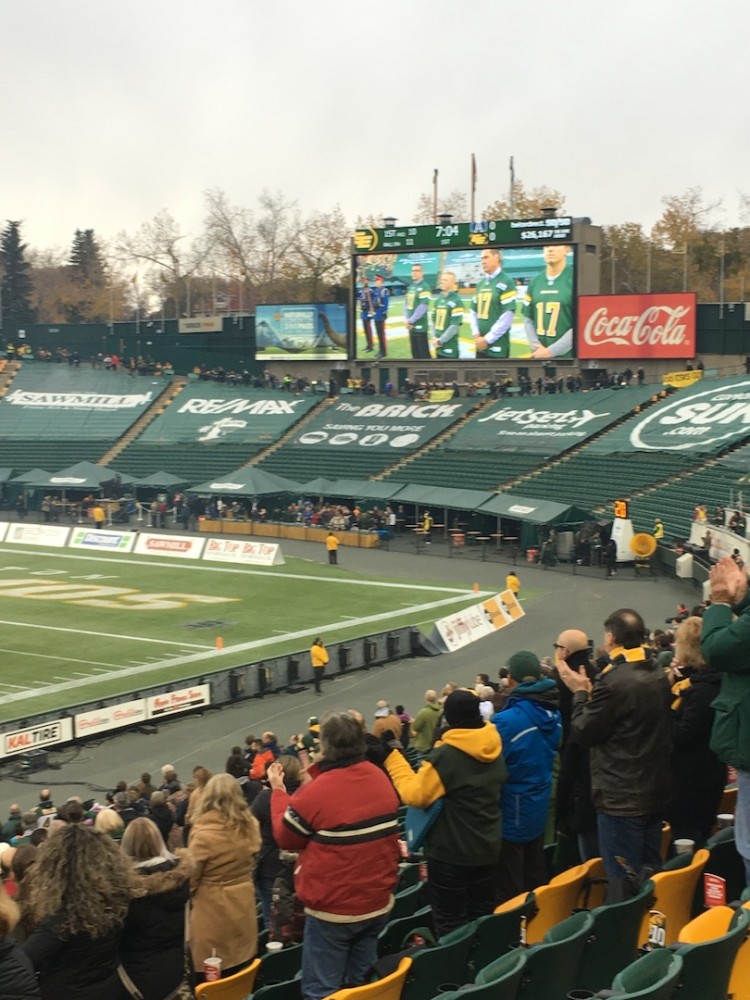 We went to an Edmonton Eskimo football game and a love fest with the men and women in blue broke out.

Two of my granddaughters and I were on a packed Park ‘n Ride fan bus. We were enroute to a Saturday nite Esks’ game. Nearing the stadium I couldn’t help but reflect on the last time the Green and Gold played a home game. As that game was ending a terrorist wrought havoc outside the stadium and left a trail of destruction into the heart of Edmonton.

Two weeks later the conversations on the bus were about that night.

“Looks like they beefed up security.” “I’d like to believe that was a one of.” “Do you think it could happen again?” “Is this where the officer was hit?”

I felt a twinge of anxiety wondering if I was risking the girls’ safety. At the same time I felt like this was our small act of defying terrorism. 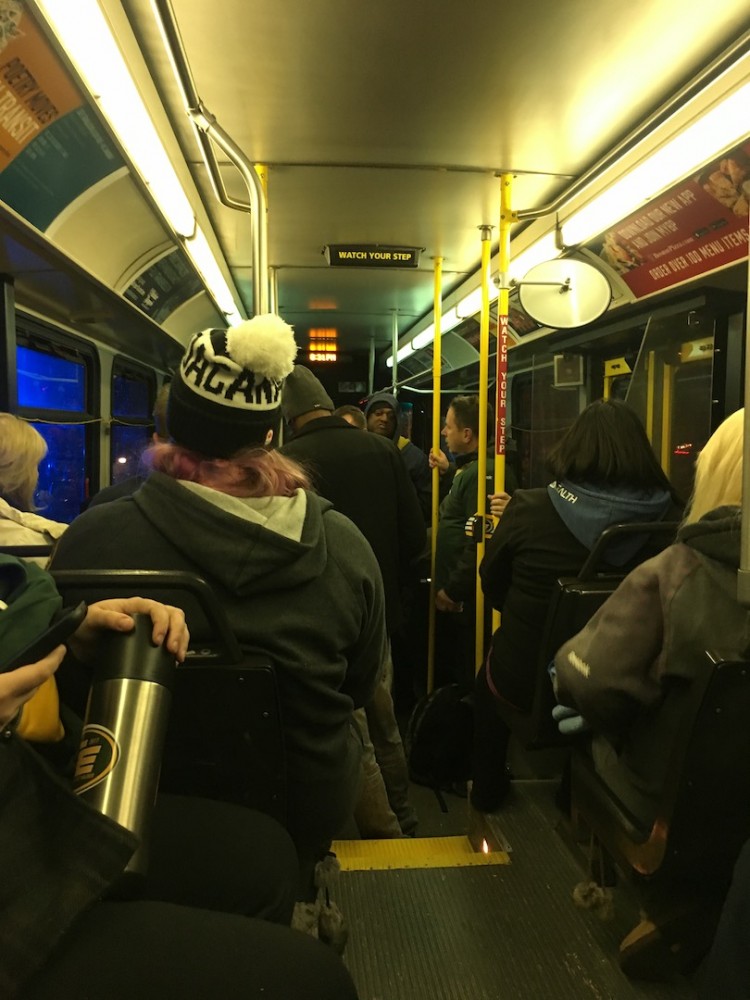 The bus stopped at an intersection a few blocks from Commonwealth Stadium. It was heavily populated with EPS officers. One of the men in blue monitoring traffic gave a thumbs up and a smile in response to a child seated in front of us.

The game time color guard was made up of EPS members. Standing beside them was the officer injured in the attack. Fans honored their newest hero – Mike Chernyk – with a spontaneous ovation when his face appeared on the jumbotron. A crisis had been averted with the bad guy arrested, no shots fired and no one killed.

I felt proud to be witnessing this outpouring of appreciation with my grand girls.

It was my first time to an Eskimos game flying solo with two of my son’s offspring. Their pink mitts were a perfect match for the pink gloves, spats and wristbands the players sported.

CFL warriors standing with women in defiance of cancer’s fear. 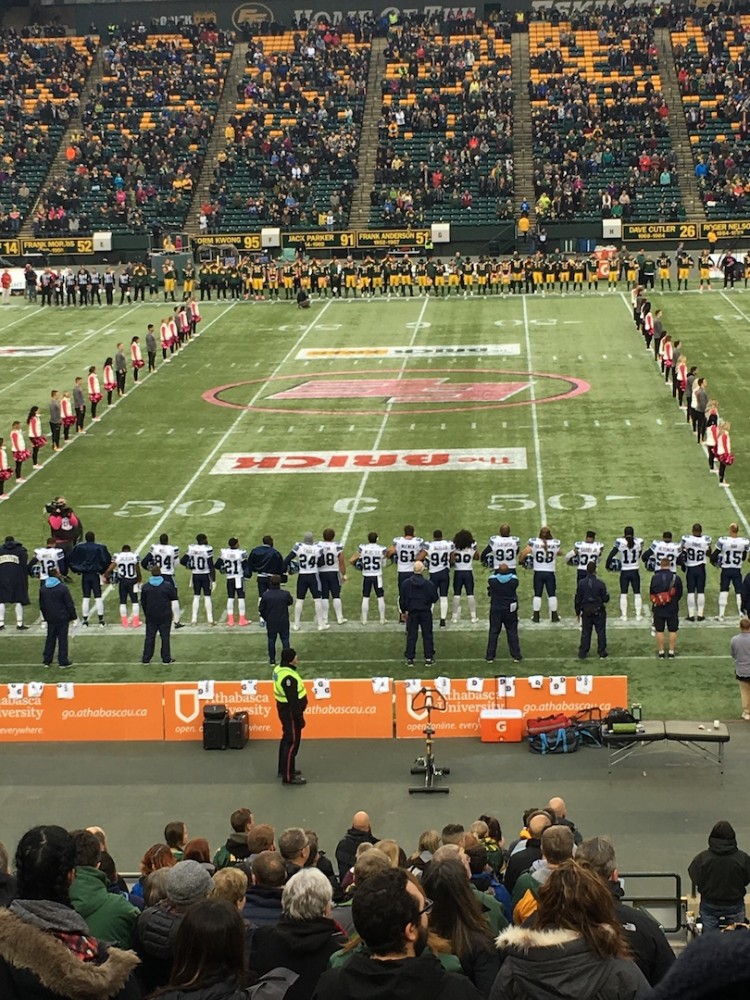 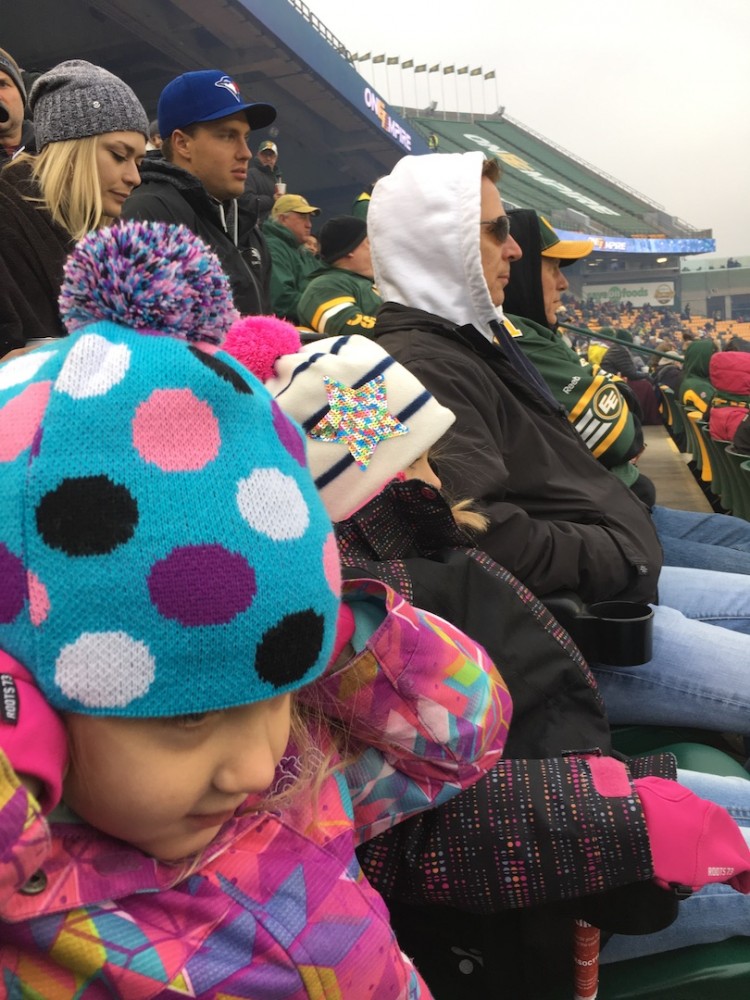 Quinn, Lena and I enjoyed a well balanced stadium dinner of popcorn and cotton candy.

And we ended up in front row seats, got to meet Nanook, and Quinn caught a touchdown football – much to Lena’s disappointment. None for her.

That is until another fan saw Lena’s tears and generously gave Lena her gift football. 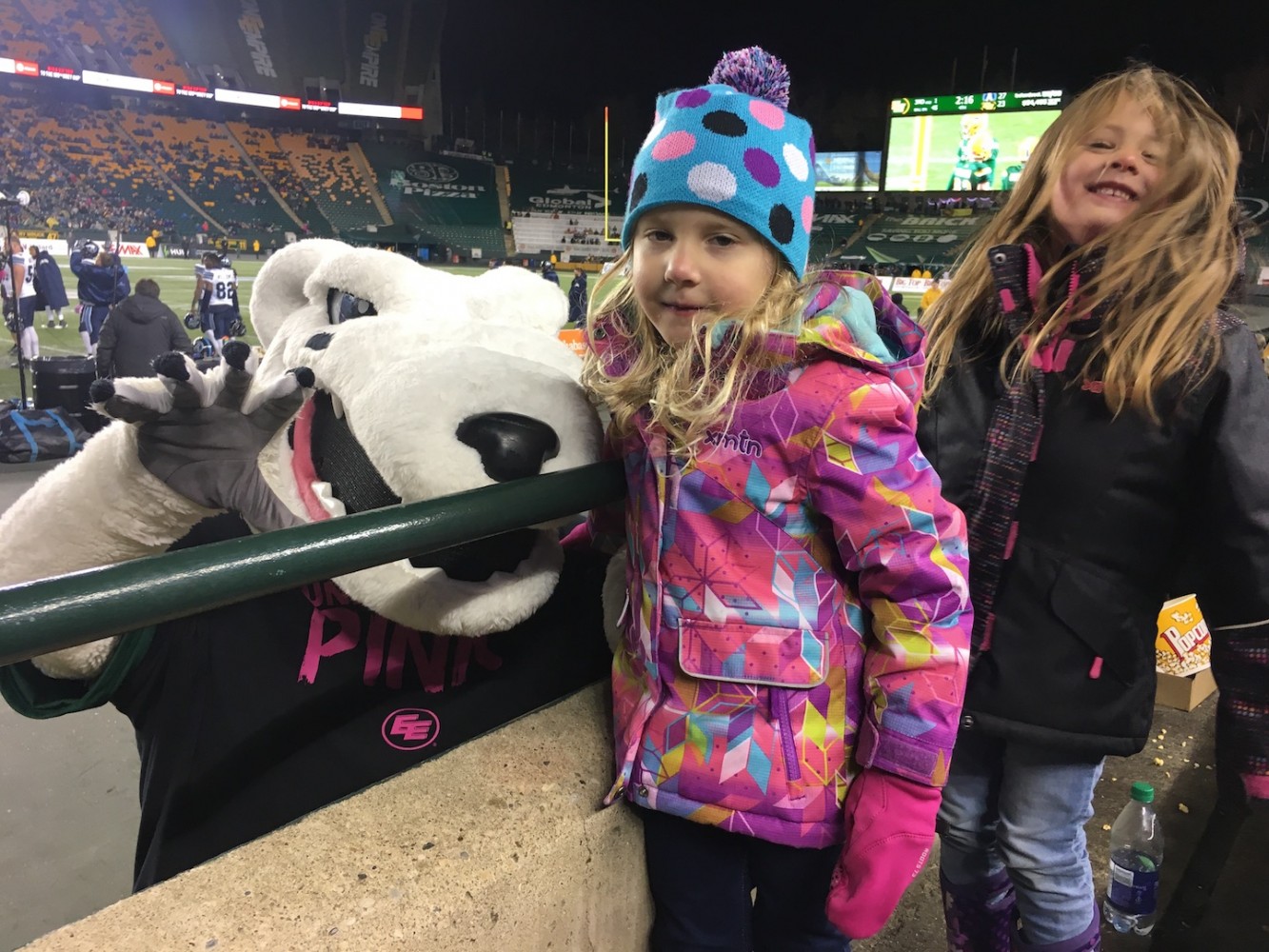 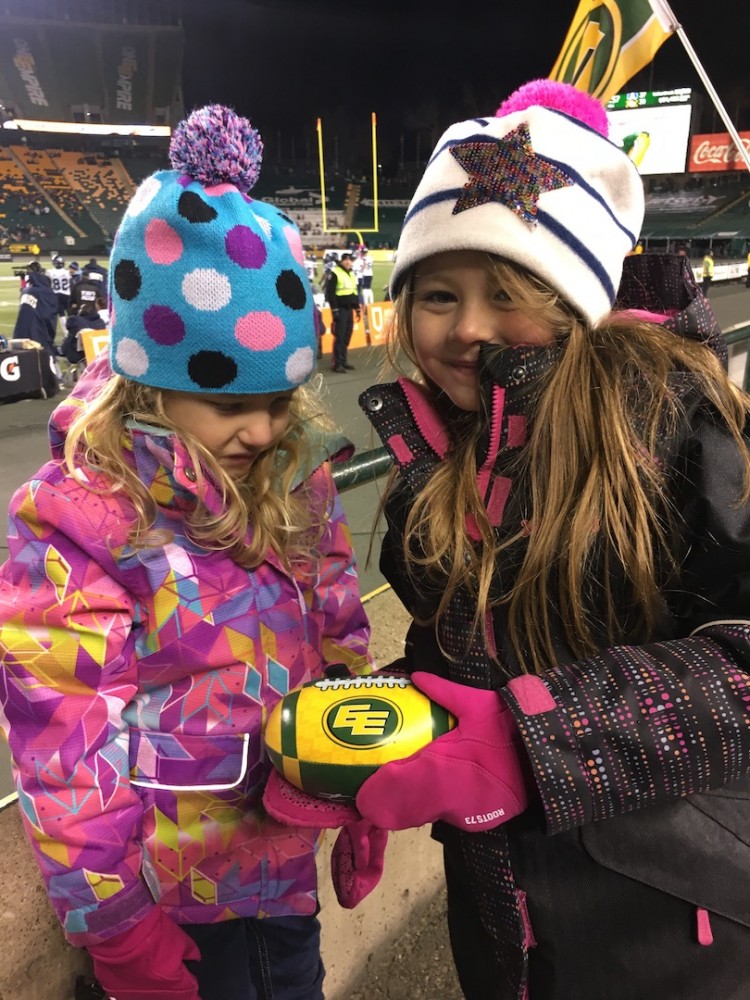 And to top off the night an Eskimo cheerleader took time to have a picture taken with some of her newest fans.

You made their night! 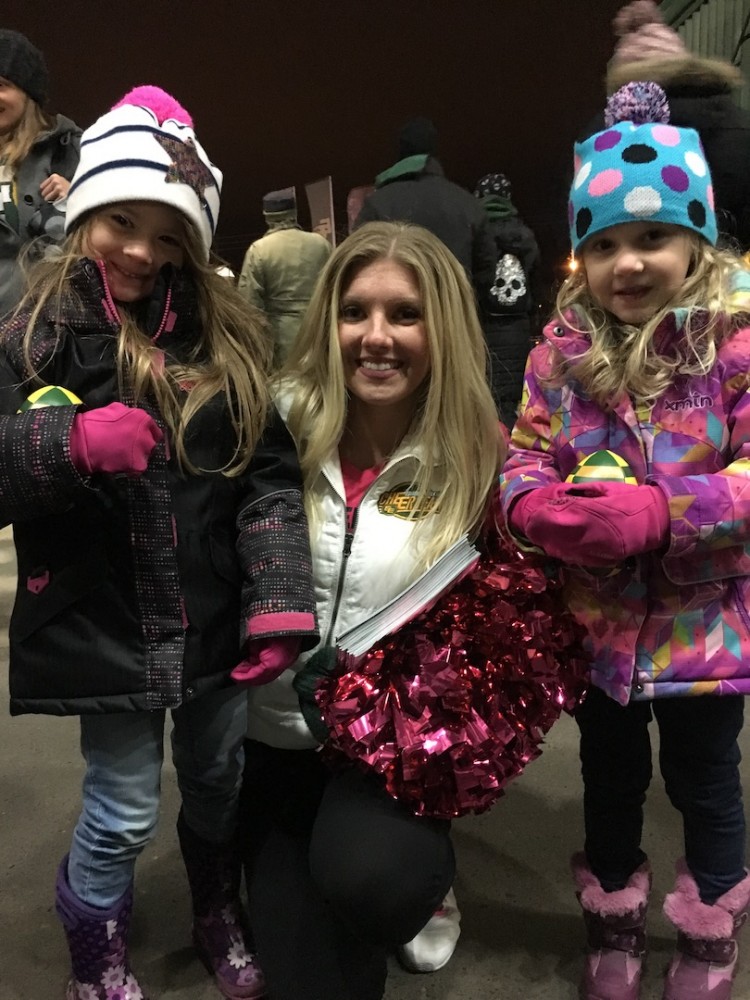 And the good guys won on a last minute TD.

Something Lena was praying for. 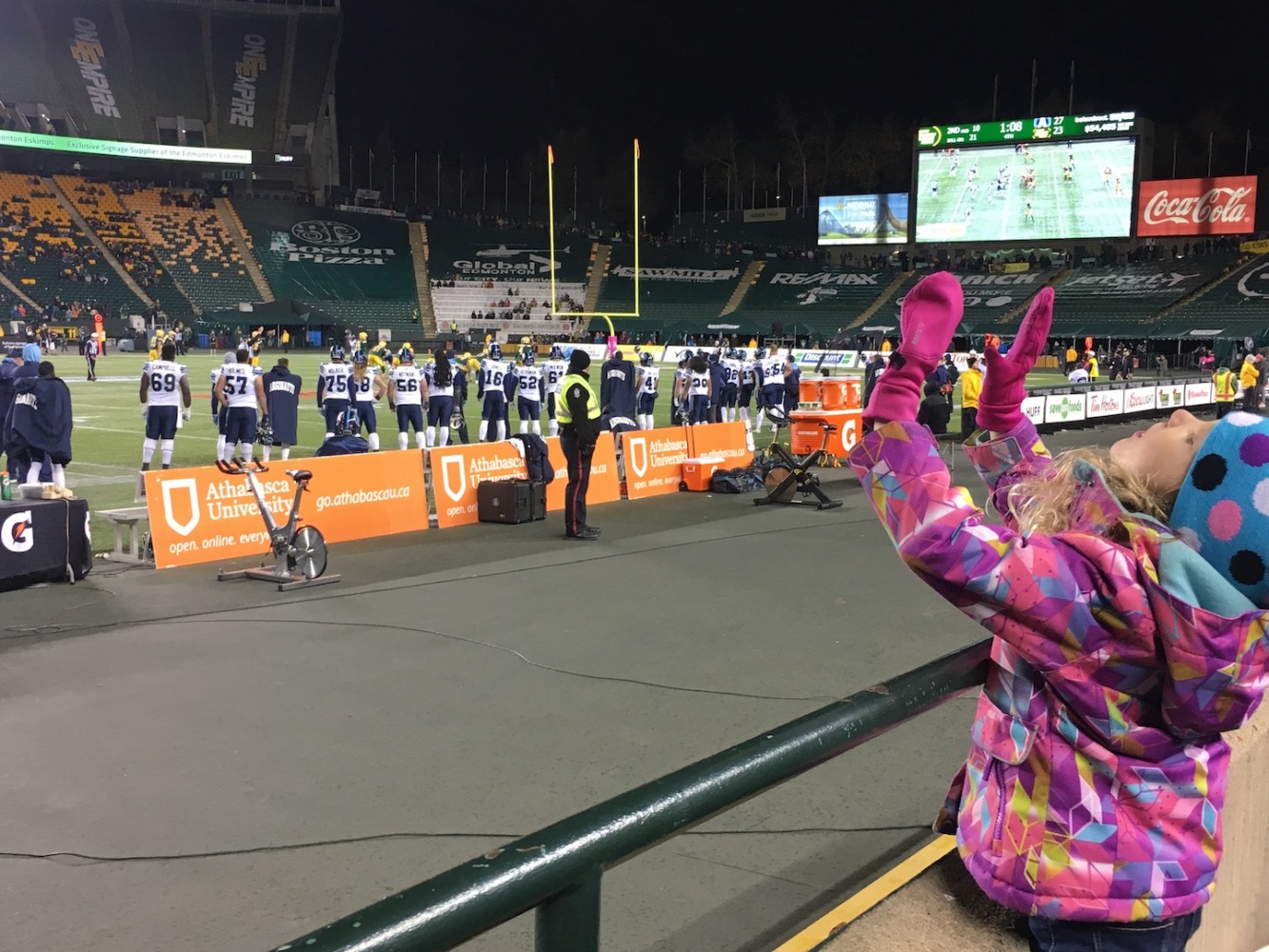 Another grateful night in E town.

APPLICATION: Were you at the game? Please leave a comment below. Thank you.