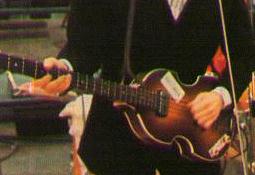 Yesterday.  For thousands of fans of Paul McCartney in Edmonton, yesterday is all that’s left. Lucy is still here but the Walrus is on the run. McCartney’s monumental first-ever concerts in Edmonton were like Christmas in November.  And oh what fun it was. Macca made it snow inside Rexall Place as 19 singers from North Pointe
joined him on stage to back-up, “Wonderful Christmastime.” As the Journal’s Sandra Sperounes said, “Paul McCartney – omygoshomygoshomygosh.”
Rock stars.  Since Elvis came on the scene in the 50’s, rock stars have had a religious-like effect on people. Their influence has been so significant that they themselves are influenced by it. From John Lennon’s “bigger than Jesus” reference, to Jim Morrison, Robert Plant, and Andrew Lloyd Webber’s “Jesus Christ Superstar,” rock and religion have sang from the same song sheet.

Fact is, Jesus did have a certain rock-star quality. He was popular with the crowds; he got in trouble with the establishment; he was misunderstood; his message resonated with people.
However, Jesus wasn’t out for himself and his own glory. To use rock star terminology, for him it was “ALL about the music” – his music was the Gospel. He didn’t care about crowd size, or about the rush of being on stage, about drawing attention to himself and having fans screaming his name. He didn’t need to fill his emptiness or find meaning at the bottom of a bottle or the end of a line of cocaine.
Jesus was the TRUEST rock star – because he really was ALL about the music.