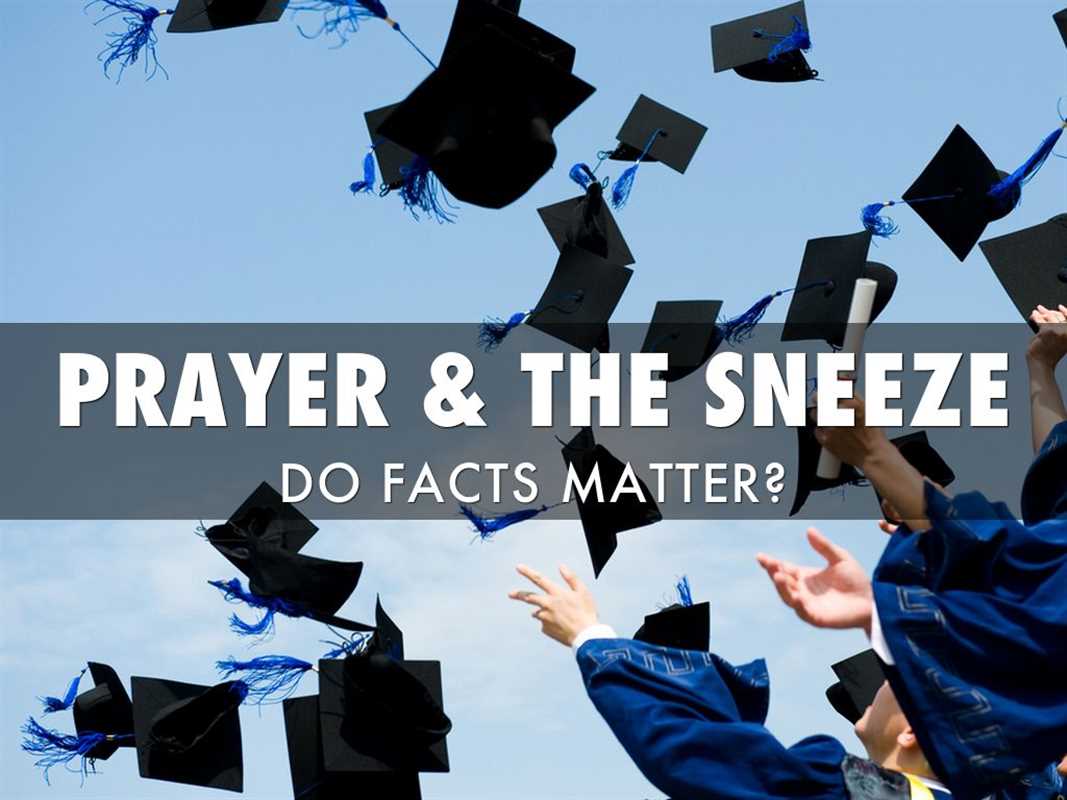 PRAYER AND THE SNEEZE: FACTS MATTER

“This is a true story” – so says the email headline.

Can you tell truth from fiction?

Do the facts matter in this feel good story?

They walked in tandem, each of the ninety three students filing into the already crowded auditorium. With rich maroon gowns flowing and the traditional caps, they looked almost as grown up as they felt.

Dads swallowed hard behind broad smiles, and moms freely brushed away tears. This class would not pray during the commencements, not by choice but because of a recent court ruling prohibiting it.

The principal and several students were careful to stay within the guidelines allowed by the ruling. They gave inspirational and challenging speeches, but no one mentioned divine guidance and no one asked for blessings on the graduates or their families.

The speeches were nice, but they were routine until the final speech received a standing ovation. A solitary student walked proudly to the microphone. He stood still and silent for just a moment, and then, it happened. All 92 students, every single one of them, suddenly SNEEZED!

The student on stage simply looked at the audience and said, “GOD BLESS YOU, each and every one of you!” And he walked off stage.

The audience exploded into applause. The graduating class found a unique way to invoke God’s blessing on their future with or without the court’s approval.”

The facts of the story are these:

1. The incident the e-mail is based upon took place on 20 May 2001 during the commencement exercises at Washington Community High School in Washington, Illinois.

2. With the help of the ACLU, the family of Natasha Appenheimer, that year’s valedictorian, brought suit to prevent the inclusion of the invocation and benediction traditionally given at the school’s commencement ceremony. The suit was decided in the favor of the Appenheimers when, three days before the ceremony, the court handed down a temporary injunction barring the inclusion of the prayers on the basis of their having been deemed “school sponsored” (and thereby an unconstitutional violation of the first amendment’s “establishment clause”).

3. People were angered by the decision, which overturned a tradition of 80 years’ standing at Washington Community High.

4. Many found unique ways of protesting the judge’s ruling. Before the ceremony, students organized a prayer vigil around the school’s flagpole. Some 50 seniors clasped hands in a circle while about 150 underclassmen and members of the community encircled them.

6. One parent distributed 120 homemade wood-and-nail crosses among the students.

ONE GRADUATE AND A HANDFUL OF FRIENDS

It was the act of Ryan Brown, a member of the graduating class who was scheduled to give a speech during the event, that is now celebrated in the e-mail. As his form of protest, he had worked it out with a handful of friends that when he faked a sneeze at the podium, they were to cry out “God bless you.”

The plan was carried out as envisioned, with everyone who had been in on it playing their assigned parts.

Mr. Brown also made another protest on his way to the podium: he stopped to bow in silent prayer, an act that prompted the audience to stand and applaud. He replied to the crowd, “Don’t applaud for me, applaud for God.”

WHAT DO YOU THINK?

I used the site SNOPES to validate this story.