It Takes a Team

The last page of Sports Illustrated is the first page I always turn to. Often there 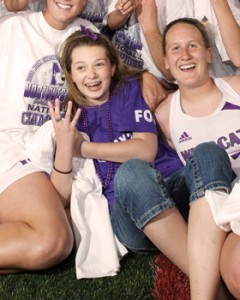 is “a human interest” story. The June 4th issue had one such story about a girl named Jaclyn. At the age of 9 she was diagnosed with a brain tumor. Now at the age of 17, she credits her survival to the Women’s lacrose team at Northwestern University who became like big sisters to her during her treatments. Their affect on her was so profound that Jaclyn started her own foundation to connect elite sports teams with children suffering from brain tumors. And…Northwestern was so inspired by Jacyln’s courage they went out and won 5 National Championships in a row, dedicating each season to her. Now there are more teams than children who want in on the program.
It takes a team!
Do you see how North Pointe could be “the team” for people facing crisis?  How could the Lord use us to lift others up and give them hope and healing?  How could people needing help be an inspiration to us through their courage and love?  What do you think?