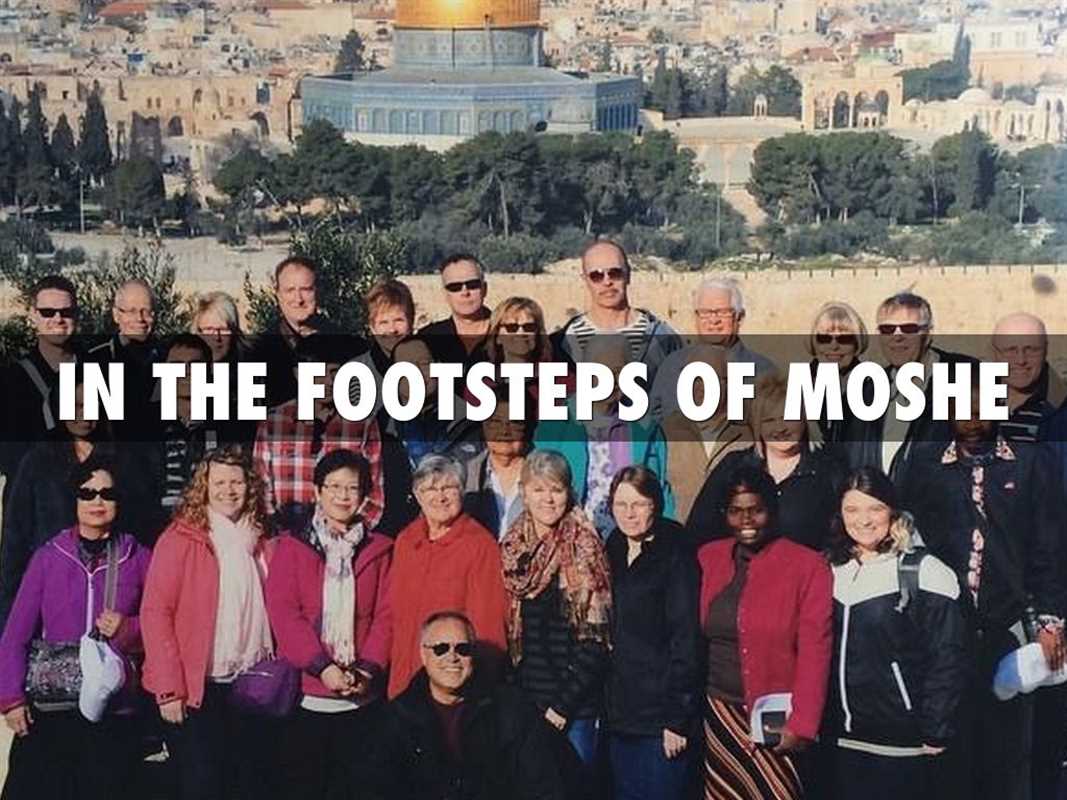 IN THE FOOTSTEPS OF MOSHE

When was the last time you had to pinch yourself so you wouldn’t miss the moment you were living?

For me it was feeling the sea breeze on my face and the wooden deck of the boat beneath my feet as we silently glided across the surface of a sea called, “Galilee.”

Could this have been the very place that 2000 years ago, Jesus, awakened by his anxious disciples, spoke calm to a furious storm? Were the hills on the horizon the long ago home of the Gaderene who was possessed by a legion of demons? Might it have been at this spot that Jesus appeared, walking on the water on a moon lit night, and invited Peter to become a fellow water-walker? 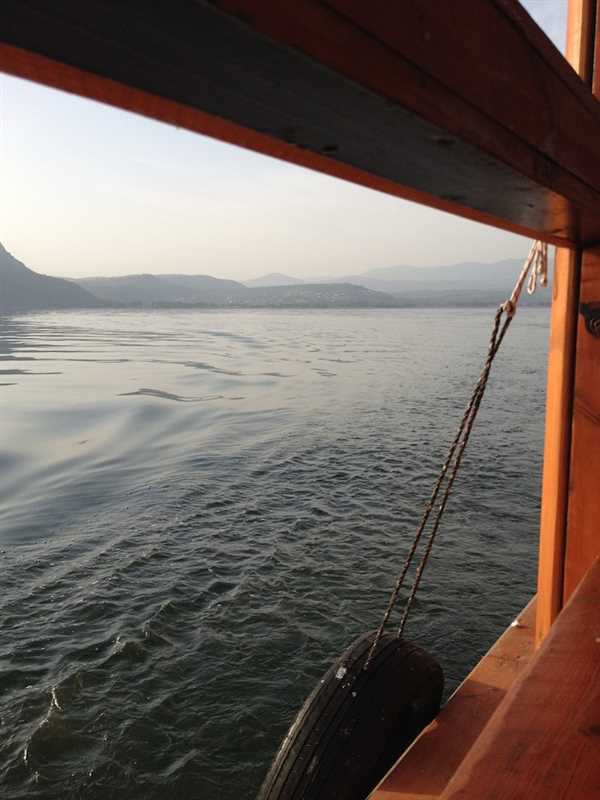 I read the historical account from Matthew 8:24 to my twenty-eight traveling companions, on a pilgrimage to Israel. The Biblical words held more meaning for each of us than they ever held before.

What happened next was surreal.

The owner of the boat hoisted a Canadian flag. He then played a recording of “O Canada,” which brought us to our feet as we belted out our national anthem and finished with a cheer worthy of any good ‘ol hockey game. Traveling with us were Pastor Zowa and his wife, Amina, from our Village of Hope in Harare, Zimbabwe. Just for good measure the boat owner raised the Zimbabwean flag and they sang their anthem.

It was true…we were in a boat, on the sea where Peter, James and John eked out a living as fisherman, before Jesus called them to become “fishers of men.” It was on the shores and hillsides of this very body of water that Jesus taught the body of his revolutionary message and transformed the way his followers understood their Scriptures.

This was a dream…a dream come true. 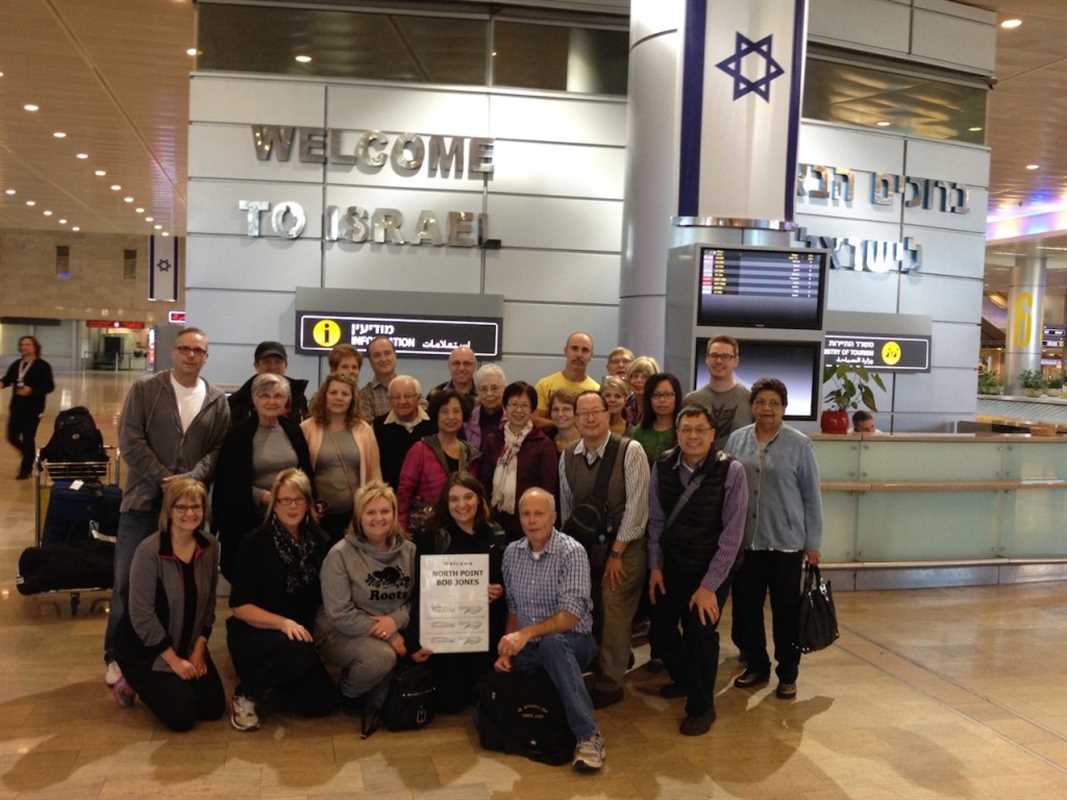 In February 2015, twenty-seven adventurers departed the snowy streets of Edmonton, Alberta and disembarked hours later in the warm sun of Tel Aviv, Israel. The flight not only took us half way around the world but 4,000 years back in time. For all of us, it was our first time in the Holy Land.

A trip to Israel is billed as “walking where Jesus walked.” To do this successfully you need a guide. We had the best in Moshe Malka. Within a day of meeting him, Moshe had become a trusted guide, an entertainer and a friend. We had expected to walk where Jesus walked but not in the footsteps of “Moses,” which is the English version of the Hebrew, Moshe.

After guiding us to Caesarea Philippi, Moshe asked us, “Why would Jesus have brought his disciples here?” Moshe asked a lot of tough questions. Much of the time we came up short on the answers. 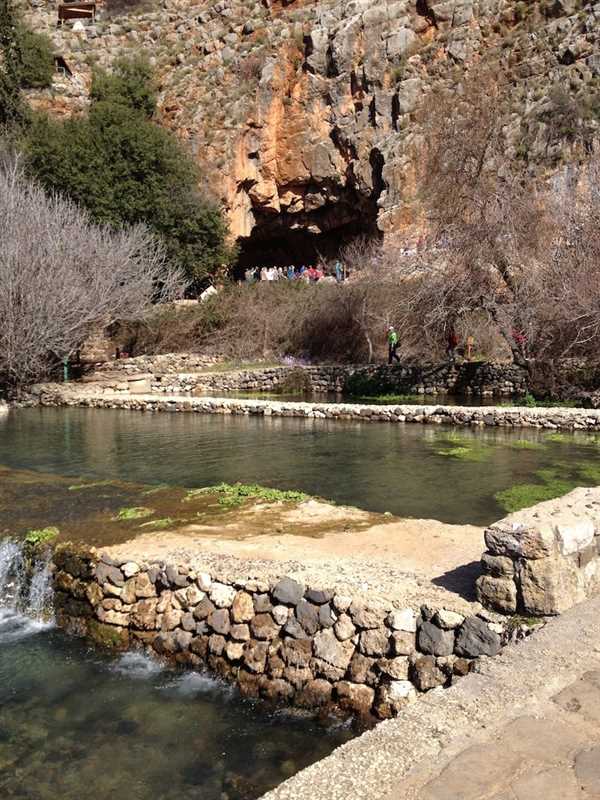 Caesarea Philippi was a Roman city, the home of a temple to the god, Pan which covered the entrance of a cave-like structure that the locals knew as “the Gates of Hell.” It was not the kind of place that good Jewish boys had any business being. Our brief bus ride from the city of Tiberias paled in comparison to the arduous journey around swampland and up hills that Jesus and his disciples made on foot.

It was here that Jesus posed a question of his own. “Who do men say that I am?” (Matthew 16:13-20) Jesus wanted to convey to his disciples that all they saw would one day pass away, but the kingdom he was coming to establish would be a “church” – a called out multitude of people – built on Him – the Rock – and “the gates of hell” would never prevail against it.

“The valley you see is Megiddo.” Moshe had led us to the top of Mount Carmel for a view of the vast arena that would host the showdown of all showdowns – Armageddon. We read from 1 Samuel about Elijah’s showdown with the prophets of Baal. ”Why do you halt between two opinions? Choose you this day whom you will serve.” We looked into the valley where the vanquished prophets were put to death by Elijah. Moshe pointed out that it was here that Gideon’s 300 had a showdown against the Midianites, whose camels were as numerous as the sand of the sea. Its easy to see where hundreds of thousands, if not millions could gather for the war to end all wars. 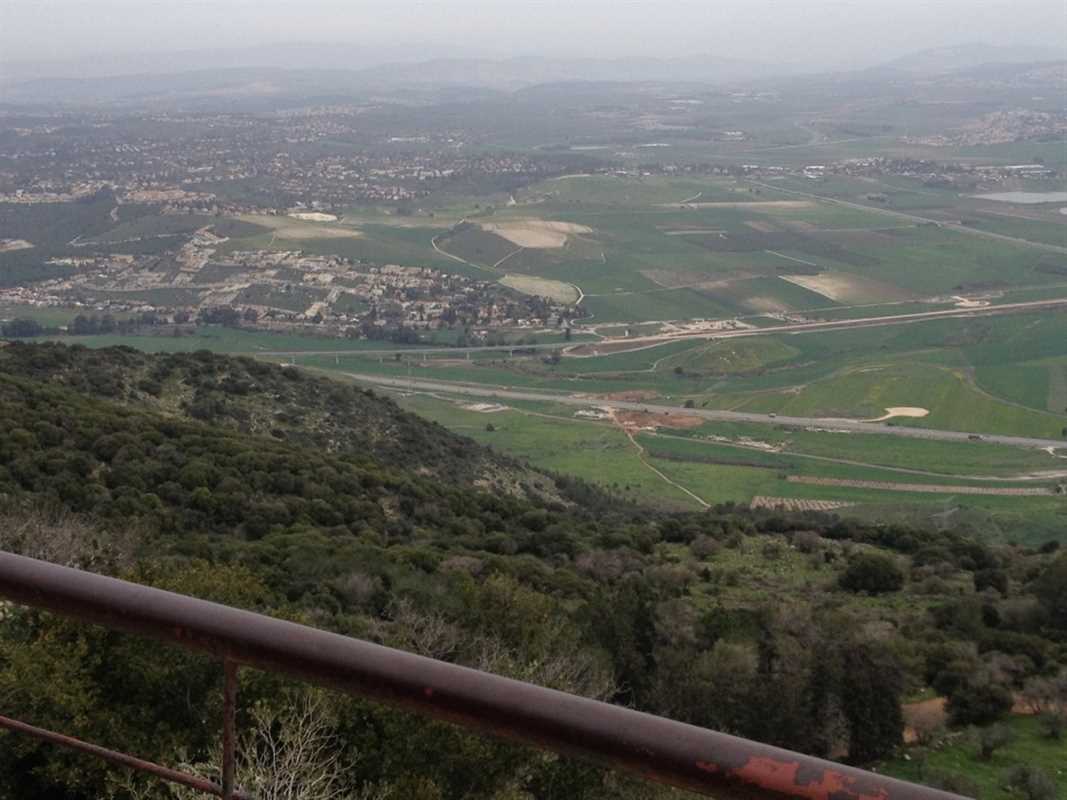 We were in Manger Square, Bethlehem, a region controlled by Palestinians. We were about to enter the place where a long ago Judaen Cinderella gave birth to a son in a cave. We entered to see the tiny space. It had little in common with the familiar crèche scenes of Christmas. Humble. Plain. Lowly. Stone. We descended stairs that took us to the place. “Unto you is born this day in the city of David, a Saviour who is Christ the Lord.” 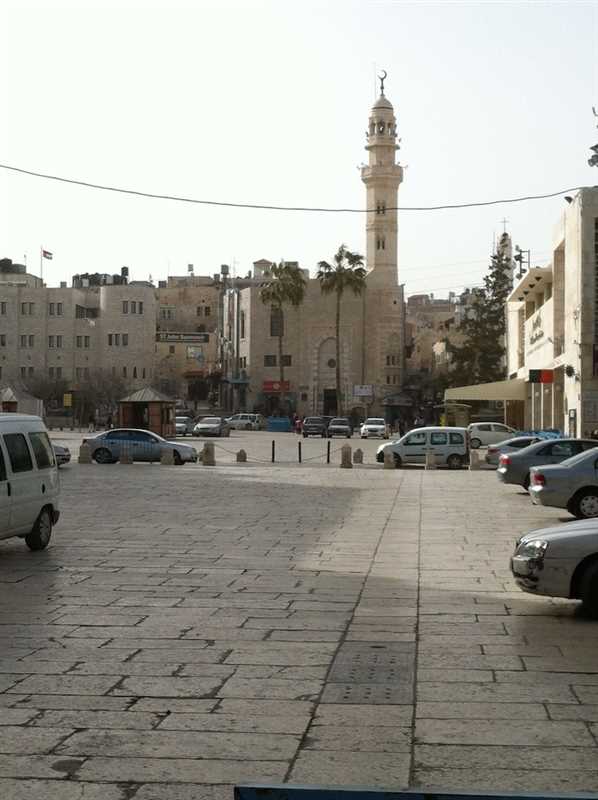 “What do you think of the Wall?” Moshe was asking us about our first experience at the Western Wall – the “Wailing Wall.” While there wasn’t any wailing, there was a lot of praying. Jewish men, wrapped in prayer shawls, mezuzahs tied to their foreheads and arms, methodically bowing to the wall and praying. “Its awesome, Moshe.” He told us, “Now we will go to see the Wall as Jesus saw it.” 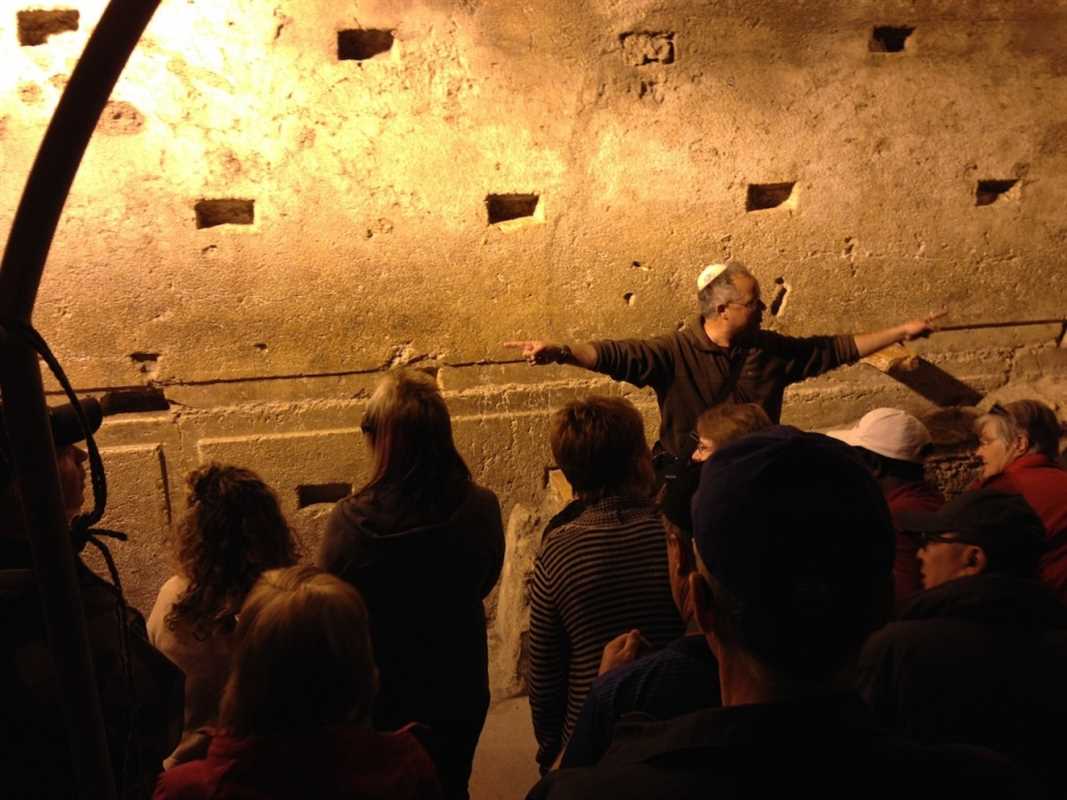 We descended into the earth, beneath the city of Jerusalem to a level three stories down. Moshe showed us stones from the temple of Jesus’ day that each weighed 520 tons. How were they put in place? No one knew for sure.

We walked along original Roman pavement to a place where Jesus, like all Jewish males would have frequented at Festival times. “The footsteps of Jesus” – we were standing where He walked.

2000 years disappeared in a moment of worship. 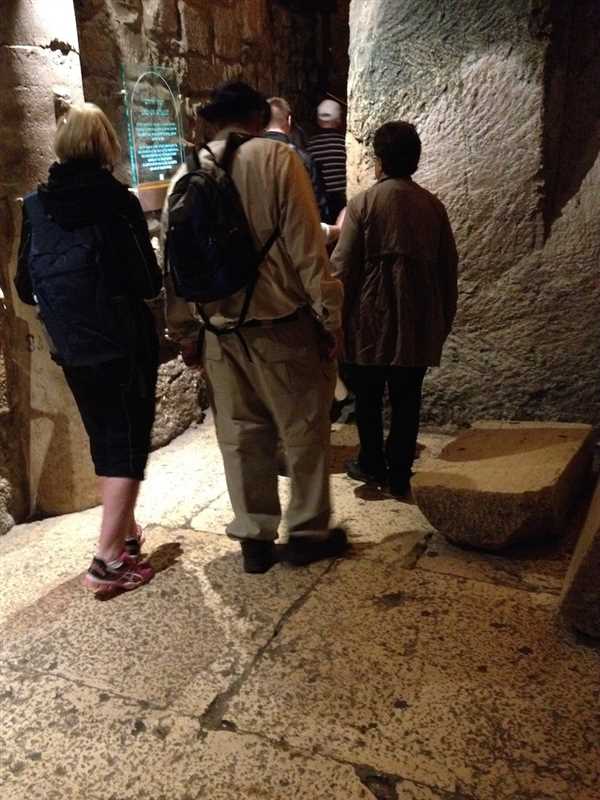 We were ascending into a pit that none of us ever imagined existed. 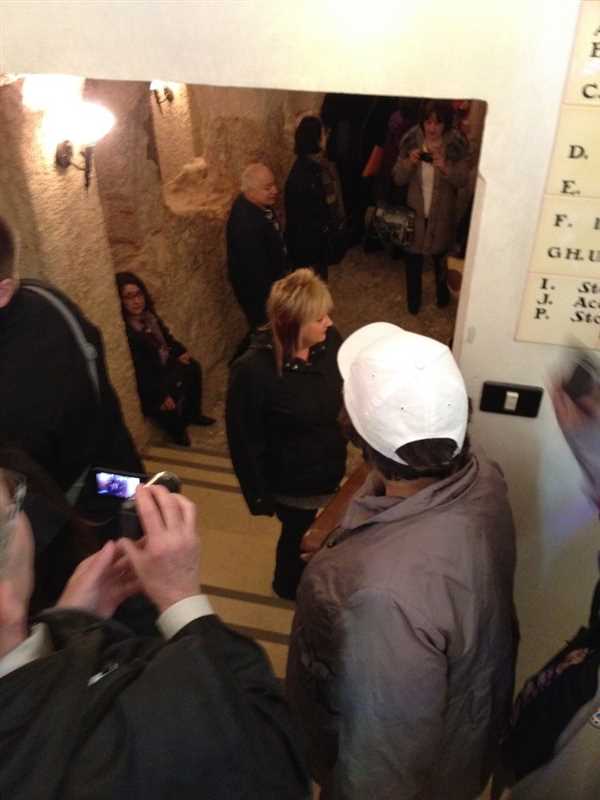 Psalm 88 was the reading.

Together we sang, “I love you Lord, and I lift my voice, to worship you, O my soul rejoice. Take joy my King, in what you hear, let it be a sweet, sweet song in your ear.”

No need now for a PINCH – our tears were sobering enough. The presence of Jesus was tangible and powerful.

The “place of the skull” – Golgotha – we were just meters away from it.

Moshe asked us, “Was Jesus crucified on a hill?” The song says so, but we learned not to quickly resort to the familiar. 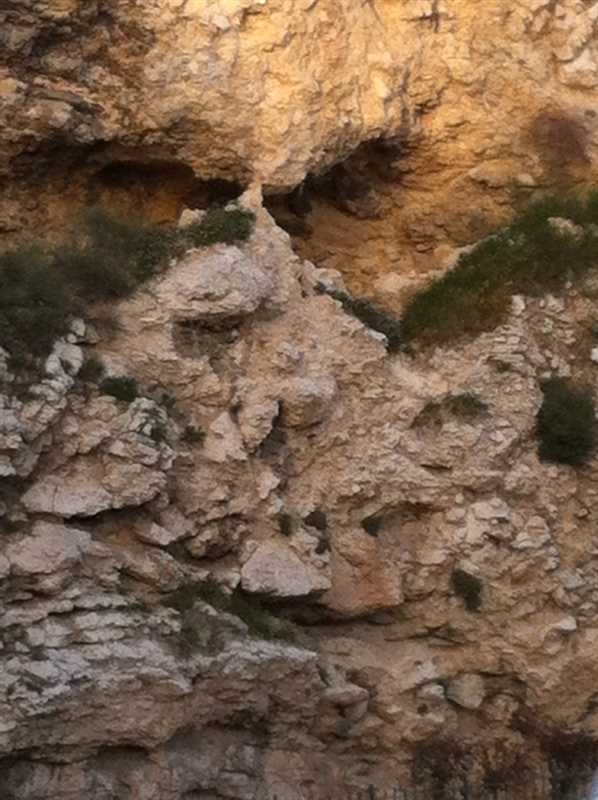 The place of this skull overlooked a path, commonly used by people in Jesus’ day. To be crucified here made sense of the fact that passersby mocked him. The location was just outside the walls of the 2nd temple era, Jerusalem.

Golgotha was also close to a garden – an olive garden. There in the garden was a tomb cut from the rock – the original gravesite of Joseph of Arimathea? 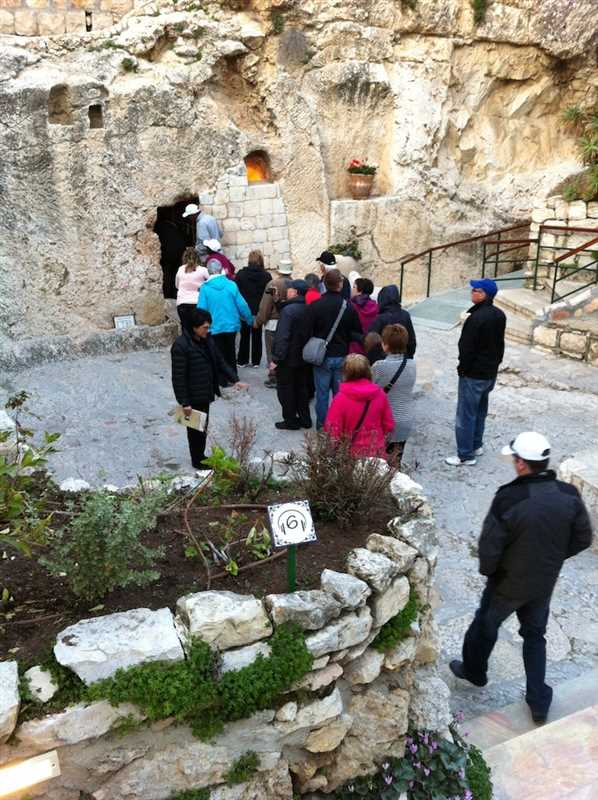 It was close enough to the place of crucifixion that grieving women and disciples, hurrying to beat the start of the Sabbath, would have been able to transport the body in time. We went inside. Was this the place that the felt the power of the resurrection? 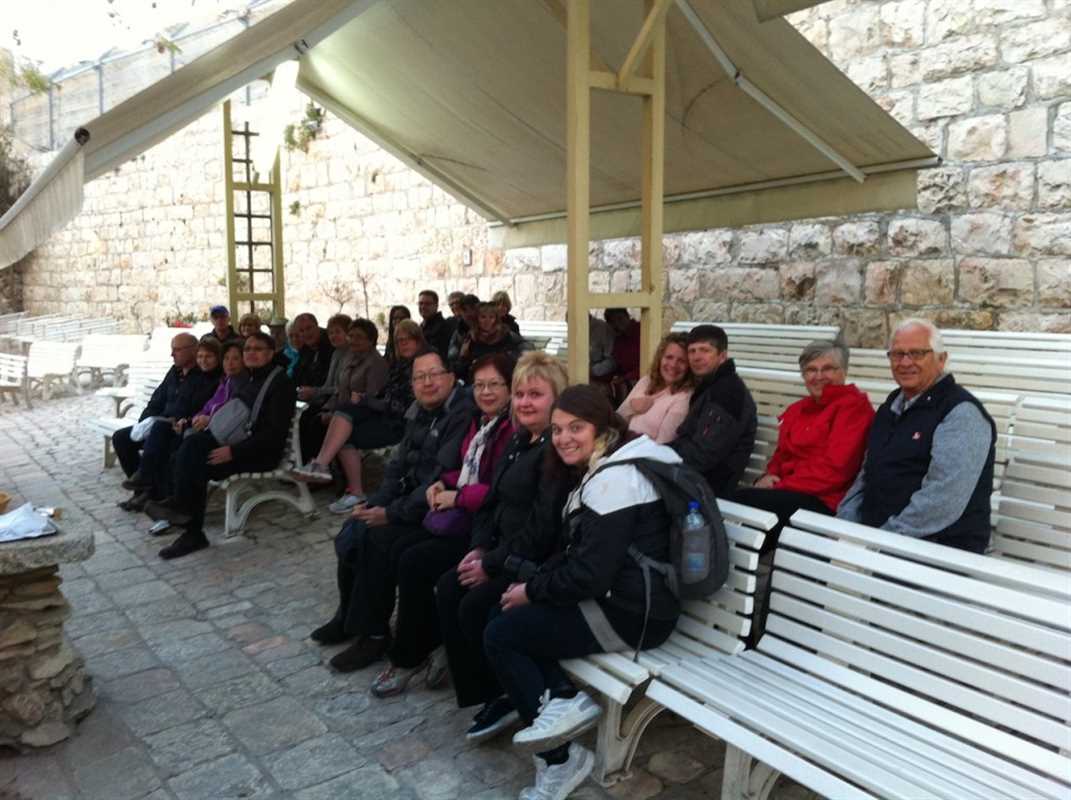 We shared communion – unleavened bread and olive wood goblets – in the shadow of Golgotha and in view of the tomb. I read from Isaiah 53 and 1 Corinthians 11.  Pastor Zowa prayed. It was a somber but glorious moment.

We’d have “stayed in the garden with Him” but it was time to go.

The sun was setting; a breeze picked up. It was cold even for Canadians – the kind of cold that makes you shiver and your eyes water – or was that the breath of the Holy Spirit and the tenderness of the moment?

A pilgrimage to Israel is a trip of a lifetime. Truly, the Bible comes alive in ways you cannot imagine without being there.

Should every follower of Jesus do all they can to make one trip to Israel, the Holy Land?

For decades I had declined invitations as a pastor to go to Israel. I’m glad I finally went.  I should have done it sooner. Everyone on the tour expressed similar sentiments. 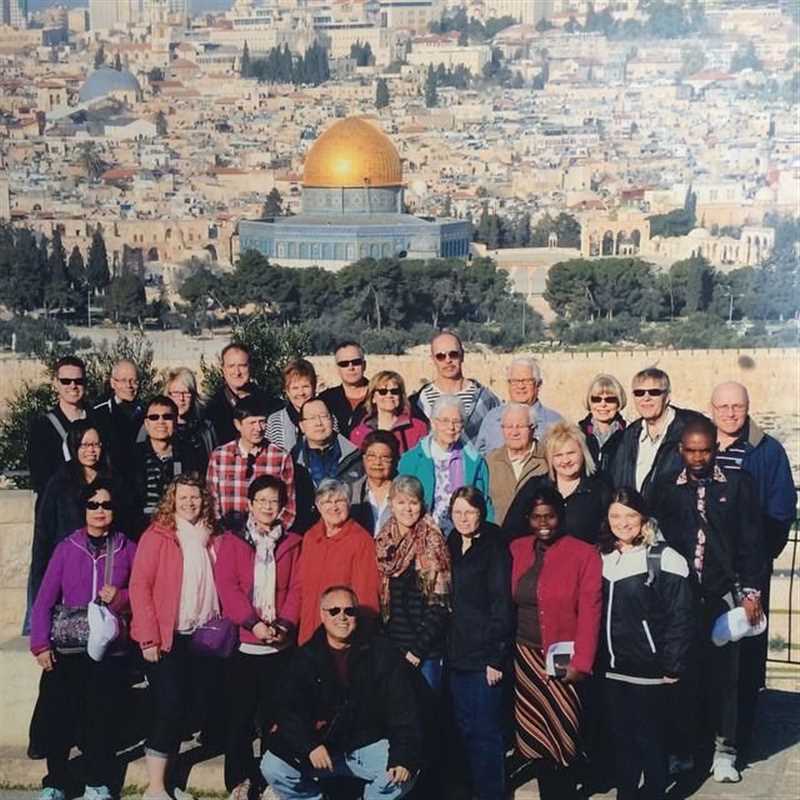 I invite you to pray a prayer that all pilgrims and every follower should pray:

“Lord, we have been inspired to walk WHERE you walked. Help us now, to be transformed by walking AS you walked.”

We toured with International Heritage Tours under the direction of Avie Esakov and highly recommend your consideration of their services.