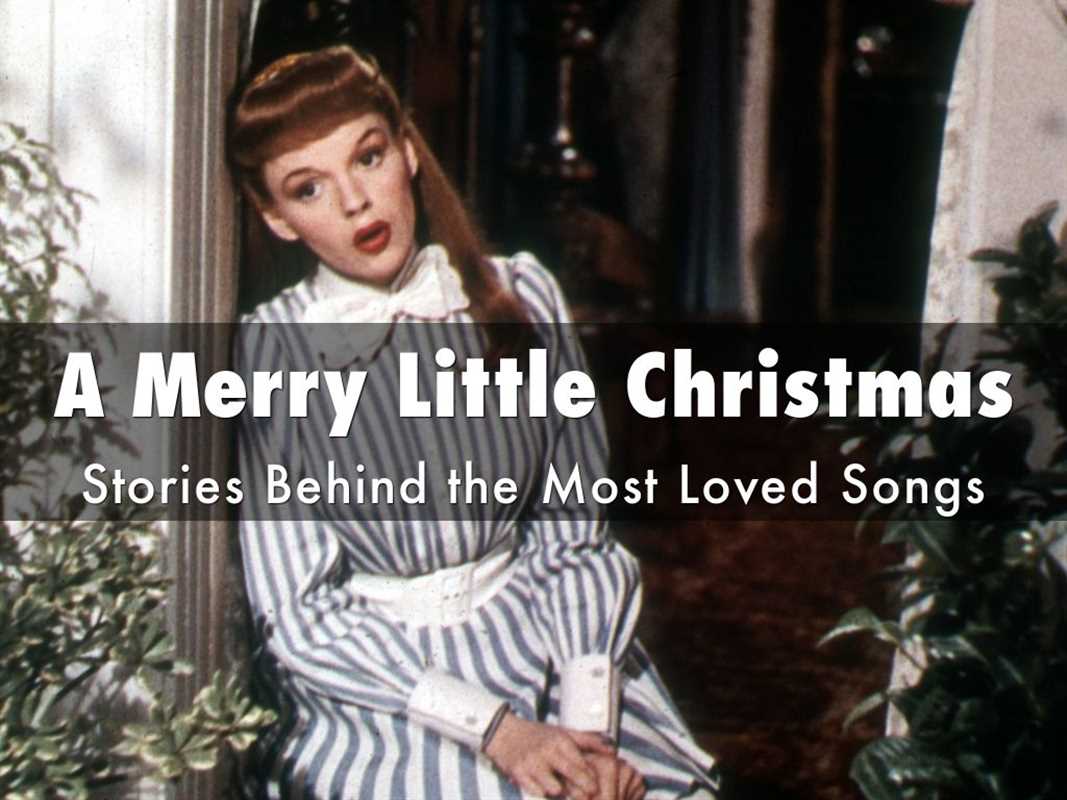 HAVE A MERRY CHRISTMAS!

The song, “Have Yourself a Merry Little Christmas” is loved by millions, including me.

Its been covered by singers like Frank Sinatra to Twisted Sister. There are over 500 versions of the song on iTunes.

I bet you’ll hear it sometime before Christmas Day 2016 is over.

What makes the song so popular is as basic to human nature as breathing.

It was Christmas 1944 and World War II was in its final stages.

Judy Garland, perhaps the world’s greatest entertainer, was about to star in what would become a movie classic, “Meet Me in St Louis.”

The movie tells the story of a close-knit family living in St. Louis in the early 1900s. The family is devastated when the father announces that they will soon be moving to New York City.

In a now-famous scene set on Christmas Eve, Judy is consoling her younger sister, 7-year-old Margaret O’Brien, about their impending move away from their cherished home, friends and familiarity.

A song written for Judy included the lines, “Have yourself a merry little Christmas / It may be your last /Next year we will all be living in the past.”

THE MOST REQUESTED SONG

Garland told her producer she refused to sing the lyrics as they were written.

She said, “If I sing that to sweet little Margaret O’Brien, everyone would see me as a monster.”

At first the songwriter refused the rewrite but when Garland insisted he went back to work and came up with the now familiar lines, “Have yourself a merry little Christmas / Let your heart be light / Next year all our troubles will be out of sight.”

The song became the hit of Christmas 1944.

Whenever Garland toured the troops it was the most requested song.

In 1957, at Frank Sinatra’s request, the original song writer once again changed his lyrics, to what we have today. He shifted the happiness into the present tense and changed the ”muddle through” line to ”Hang a shining star upon the highest bough.”

James Taylor recorded his version in 2001 after 9/11 as a way for people get through the trauma of the terrorist attack.

Chrissie Hynde of the Pretenders recorded it 1989. She explained, “Singing it upset me; I was on the verge of tears. I was thinking about relationships, and how things had changed, and the people that I couldn’t see and couldn’t be with. But maybe that sadness is what people feel at Christmas, and maybe that’s why people relate to it.”

CHRISTMAS HAS A BITTERSWEET HOPE

The Christmas story is a bittersweet one.

* Joseph and Mary – ostracized and marginalized because of her perceived “pre-marital pregnancy.”

* A young girl – a solemn birth – in a lonely stable/cave.

* Mothers’ heartaches from the murder of innumerable newborns because of a crazed, jealous, Jewish king.

* A fearful flight into a foreign land resulting from doing “God’s will.”

* The hope that arises from shepherds’ reports of an angelic choir heralding a Messiah’s birth. Wisemen from the East whose generous gifts supply funds for all the family’s needs, including the flight into Egypt.

Whatever emotions occupy your heart, may your Christmas be filled with the gift of hope that Jesus gives.

See Judy Garland’s 1944 version from the movie below. The version includes the dramatic  “Snowman” scene where Margaret O’Brien takes out her frustration on the snowmen in the family’s front yard.

QUESTION: What do you like best about the song, “Have Yourself a Merry Little Christmas?” Please leave a comment below.

All three versions of ”Have Yourself a Merry Little Christmas” by Hugh Martin and Ralph Blane 1943, 1944 Renewed 1971, 1972 EMI Catalogue Partnership (successor to LOEWS) (PWH)/admin. by EMI Feist Catalog Inc. (ASCAP)