It wasn’t supposed to end this way. Doug and Mimi Marchewka endured more than enough breathless moments after their only son, Hudson was diagnosed with cystic fibrosis. Its what CF families are told to expect.

Smiling Through the Pain

Hudson started having seizures at 10 months.

He suffered epileptic seizures as a child.

He was diagnosed at age 12 with autism.

A age 14 he was diagnosed with Cystic Fibrosis.

Cared for at the Stollery Children’s Hospital.

Hudson was his family’s warrior/hero.

He smiled through his pain.

When Your Boy Has Cystic Fibrosis

In November 2018 Hudson began palliative home care. Doctors warned they were facing their last Christmas together. They braced themselves. Talking to the head nurse of home care in December was sobering as she asked if the Woods had the funeral home they would be using picked yet. It hit home that he really didn’t have a lot of time left. 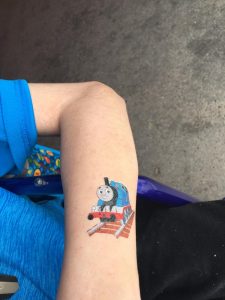 Hudson was a big fan of Thomas the Tank Engine. One of his last family experiences was singing Christmas carols on the Polar Express in Stettler, Alberta on December 9th.

Brokenhearted falls far short of describing their ache. Mimi says, “No parent should ever have to bury a child.”

The Marchewkas are people of faith. However, faith in God doesn’t lessen the hurt. What faith does is offer a hope for life beyond the hurt.

Mimi asked if I would help her with a memorial service for Hudson.

She shared this story.

I was in Dollar Tree last night, and there was a lady and two kids behind me in the LONG line. One was a big kid, and the other one was a toddler. The bigger one had a pack of glow sticks, and the toddler was screaming for them.

The Mom opened the pack and gave him one, which stopped his tears. He walked around with it smiling; but then the bigger boy took it, and the toddler started screaming again. Just as the Mom was about to fuss, the older child bent the glow stick and handed it back to the toddler.

As we walked outside at the same time, the toddler noticed that the stick was now glowing and his brother said, “I had to break it so that you could get the full effect from it.”

I almost ran, because I could hear God saying to me, “I had to break you to show you why I created you. You had to go through it so you could fulfill your purpose.”

That precious child was happy just swinging that “unbroken” glow stick around in the air, because he didn’t understand what it was created to do – which was “glow”.

There are some people who will be content just “being,” but some of us that God has chosen… we have to be “broken.”

…go through a divorce.

…bury our spouse, parents, best friend, or our child.

In those moments of desperation, God is breaking us.

But… when the breaking is done, we will be able to see the reason for which we were created. So when you see us glowing, just know that we have been broken but healed by His grace and mercy.