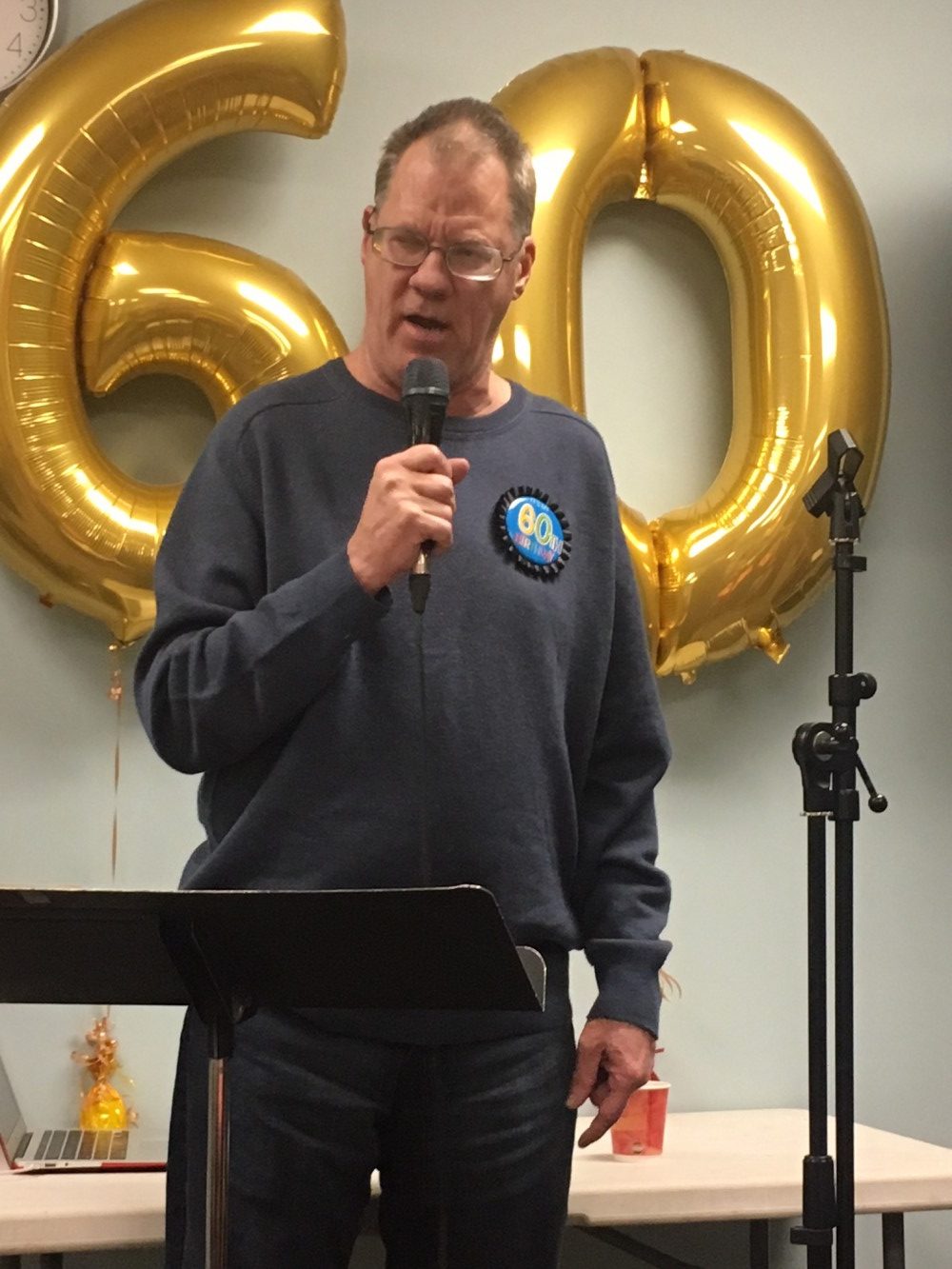 “Happy birthday dear John, happy birthday to you.” The room was nicely filled with friends. No family. These friends are his family. And they had just finished crooning out a couple of creative versions of the tune for the birthday guy.

Pretty special for the sixtieth year of a dreamer who lived through a nightmare of a childhood.

Into foster care in Edmonton.

Sent to the Michener Centre in Red Deer. Yes, that one.

Those are experiences that John Benes would like to forget.

This night’s festivities will be ones that John will always remember.

We celebrated as a diverse group united by connections with John that spanned generations and decades. He’s that kind of guy. 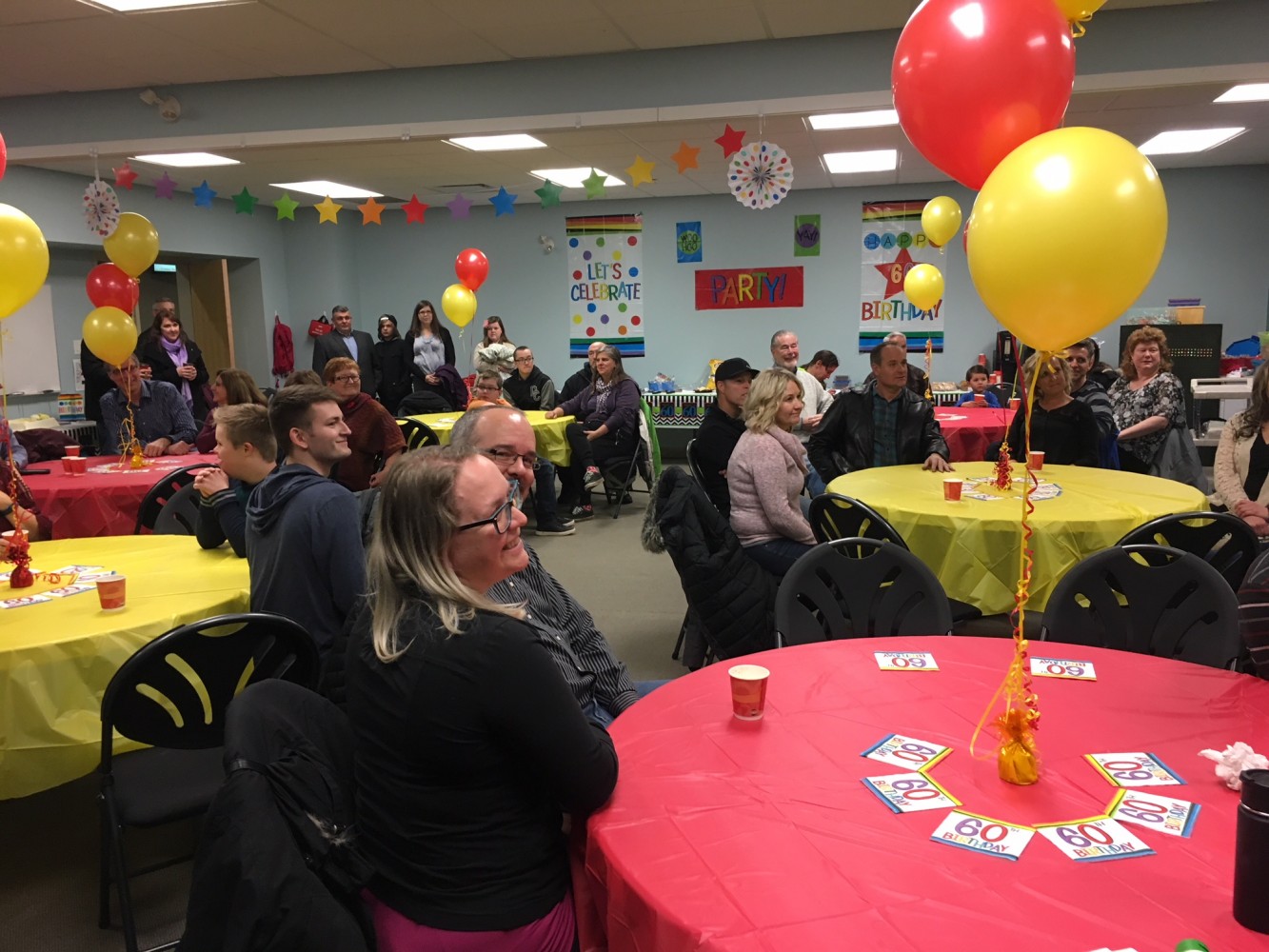 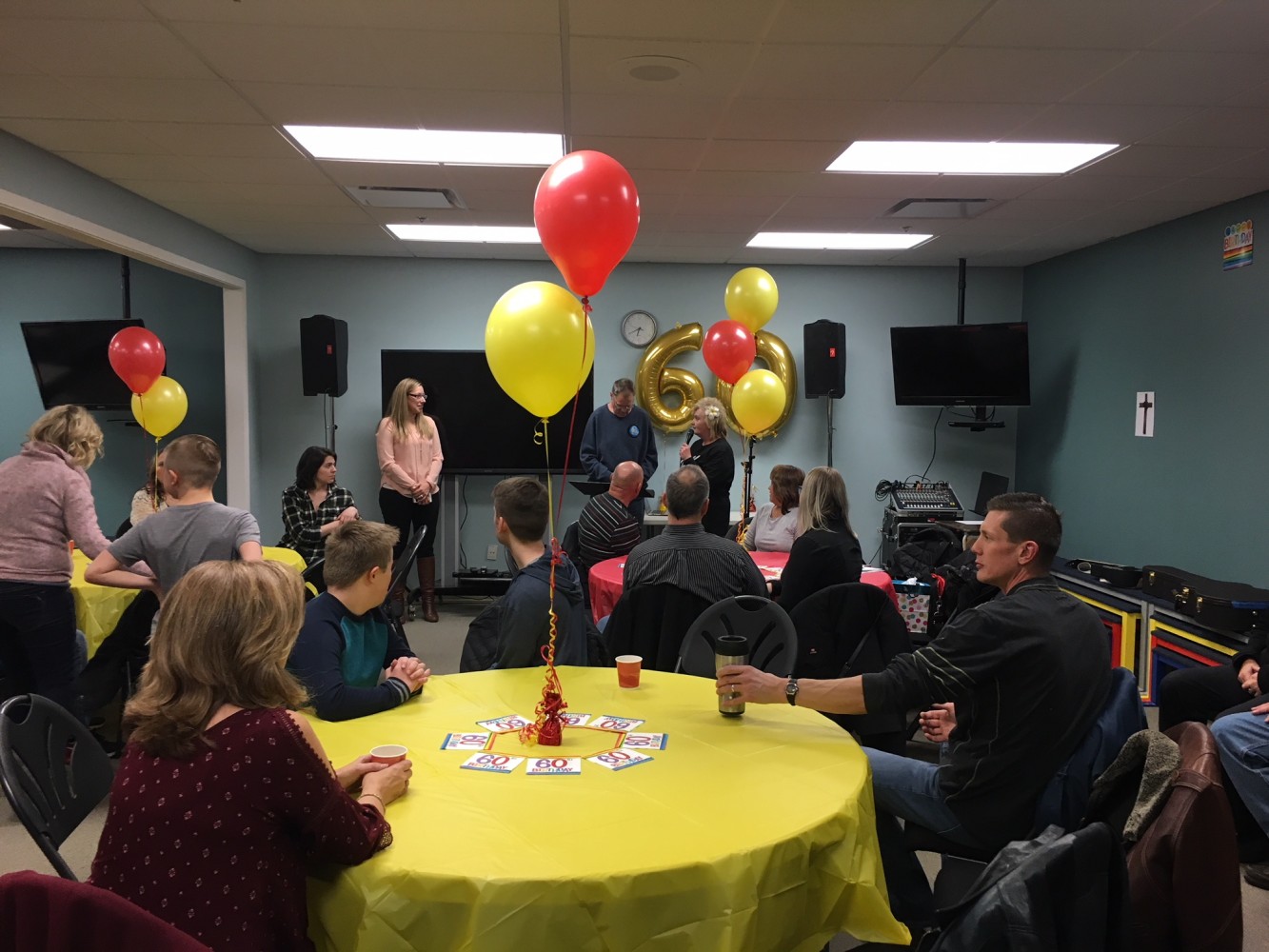 At North Pointe Church, John is well known for hugs, handshakes, and his signature move – “milking cows.” But few people know that John was a corespondent. In fact, the Chief Volunteer Corespondent for Catholic Social Services.

Going out and about meeting people. Gathering information. Doing his best to share it with others. Oh, and having lunch.

“Let’s do lunch” is his invitation for an interview that Edmonton’s mayors, police and fire chiefs, CEO’s, non-profit directors and reams of others have been gracious to oblige. John’s News and Views annual newsletter was birthed out of those lunches.

A Gift To Offer

In 2006, journalist Cheryl Mahaffy contributed a chapter to an Alberta anthology called Big Enough Dreams. Her subject was John Benes. She met him with his social worker over coffee at a Tim Horton’s and then followed him around Edmonton.

Her chapter’s title told the tale of their experiences – “Doing Lunch With John Benes.”

She remembers, “I’m sitting in Marc Barylo’s office at Catholic Social Services headquarters in south Edmonton, production central for John’s News and Views since 1991. Marc’s job as CSS Director of Communications leans to such high profile responsibilities as the annual Sign of Hope fundraising campaign. Why did he agree to add John’s newsletter to his list?

“Because John wants to tell the world about all the great things that are happening out there,” Marc says. “And it’s important for him as well. John loves people, he’s proud of our city. This guy has a gift to offer, and it’s his way of contributing.” 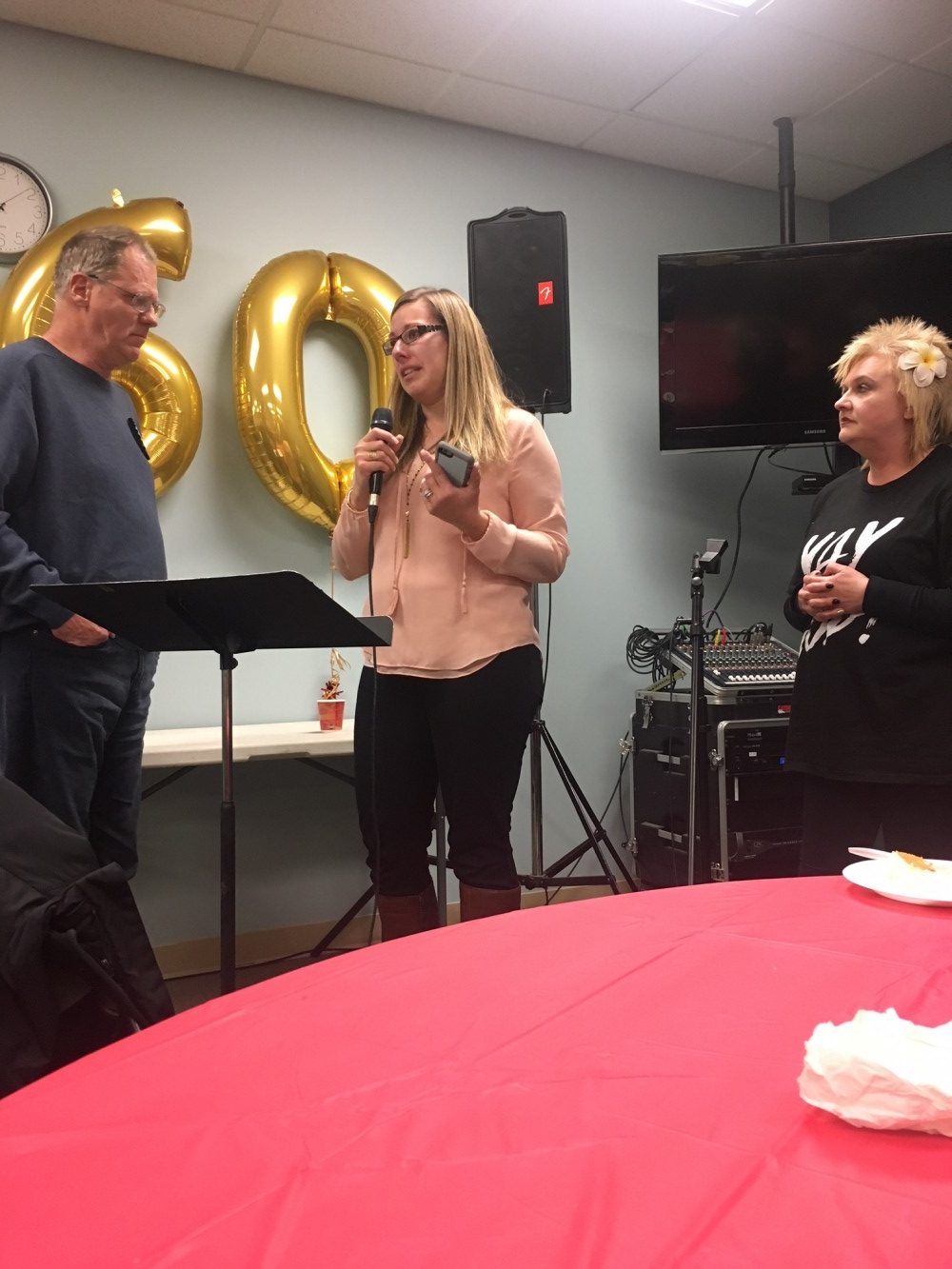 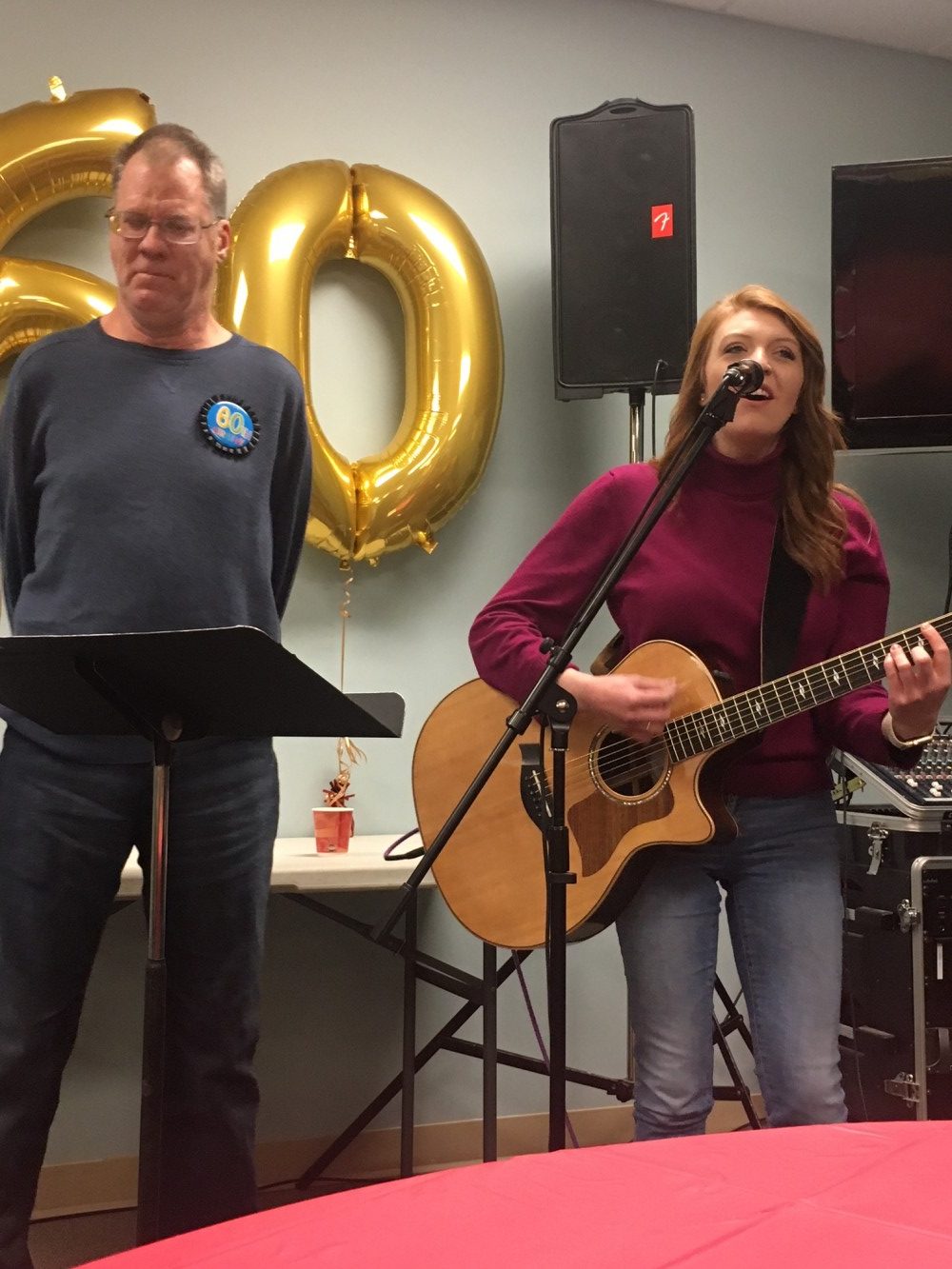 John became a Christian in 1988 and soon after began attending Central Tabernacle. That’s where people like Martin Kaup met John. Lunch was soon to follow. And the many others who befriended John quickly learned that tomato soup, grilled cheese sandwiches, and fries with ketchup were his favs.

When Central became North Pointe and relocated to the northwest part of Edmonton in 2006, John followed.

He would take the closest bus route and then walk the rest of the way to the church – usually over three kilometers – in sunshine, rain and snow. 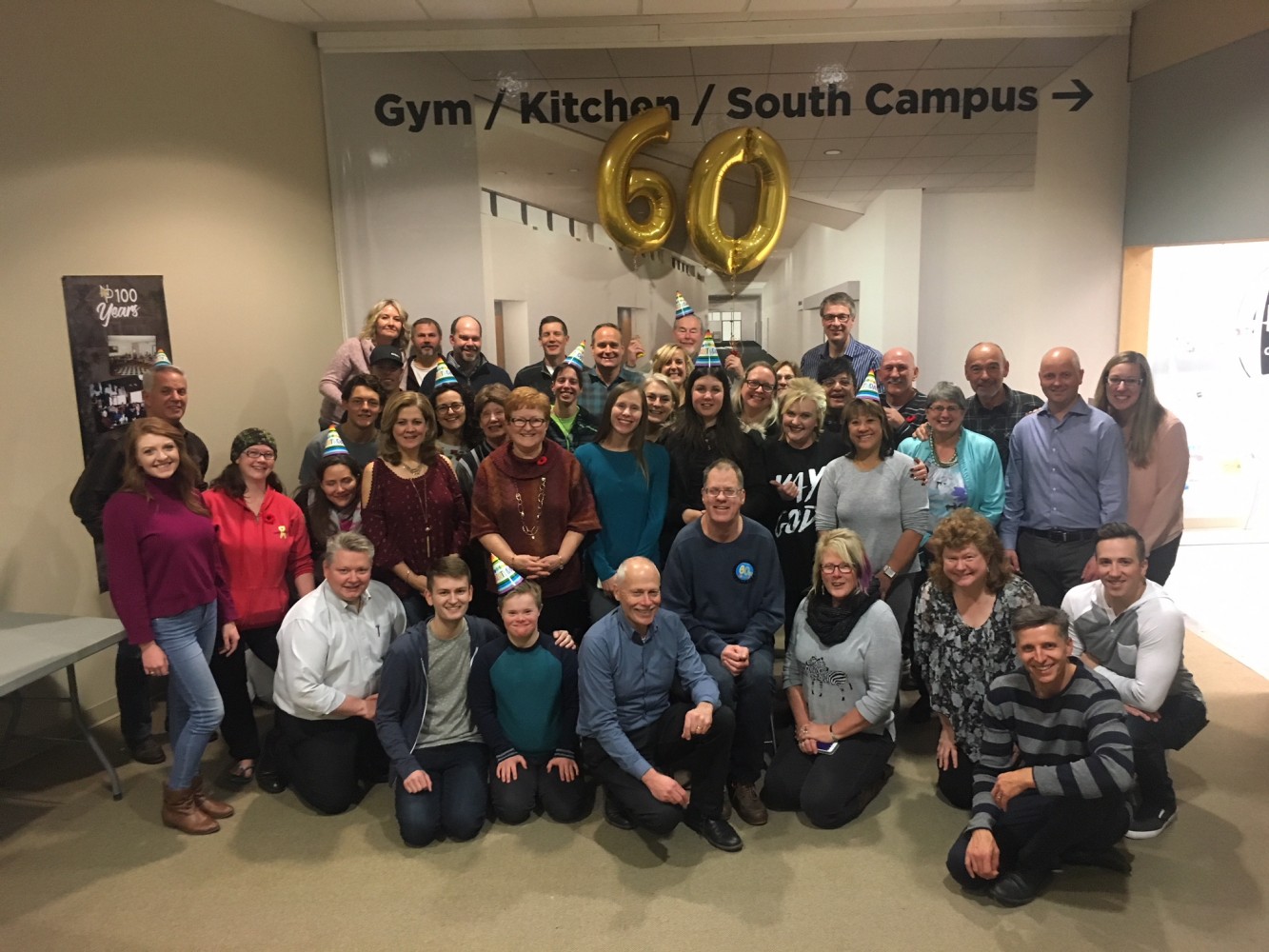 John’s a happy guy. Who else would have total strangers take him into their homes and hearts for more than just lunch?

He knows that God can make big dreams come true.

John Benes passed away on June 3, 2019 after a battle with cancer. He loved and was loved. John had a generous spirit. “Fellowship” – John’s favorite word – was as much about people as it was about the food. He now enjoys a heavenly kind of fellowship. I know he’d say the journey was worth it and for us to pay attention to ourselves and support those around us. A memorial will be planned at North Pointe to celebrate John’s life.

APPLICATION: Do you have a favorite memory or saying of John? Please share it in the section below. Thank you.