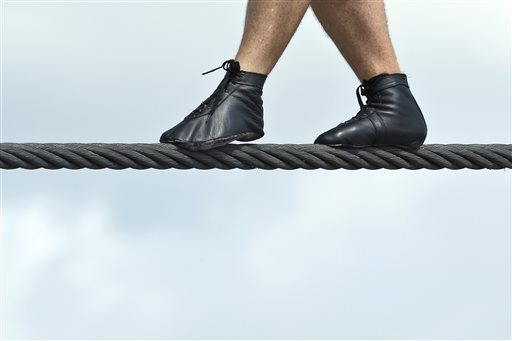 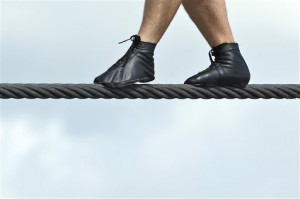 Sunday morning at North Pointe we talked about “awakening to faith.” Multiple dozens if not hundreds of people have awakened to faith at North Pointe in the past seven years. Sunday afternoon, Nik Wallenda began his 1,400-foot journey “of faith” across a two-inch cable suspended 1,500 feet above a gorge near the Grand Canyon. Nik stated after his successful walk, that he constantly talked to Jesus as he proceeded without a harness in his death-defying feat.
“I find that peaceful and relaxing and He’s the only one up there listening to me.” He added that his faith plays a crucial role in what he does. “My life is based on my faith. I guess the biggest role that it plays is that if I do fall and die I know where I’m going.”
Wallenda prayed “without ceasing” to Jesus during the risky walk of 22 minutes and 54 seconds.
“Thank you Lord. Thank you for calming that cable, God,” As he reached halfway through the tightrope walk he faced sudden wind gusts of over 20 mph.
“It took every bit of me to stay focused that entire time,” Wallenda, 34, said, according to Reuters. “My arms are aching like you wouldn’t believe.”
He had to stop and crouch down twice due to the wind for the first time, and later the cable picked up an unsettling rhythm. But it “was a dream come true,” he said. “This is what my family has done for 200 years, so it’s part of my legacy.”