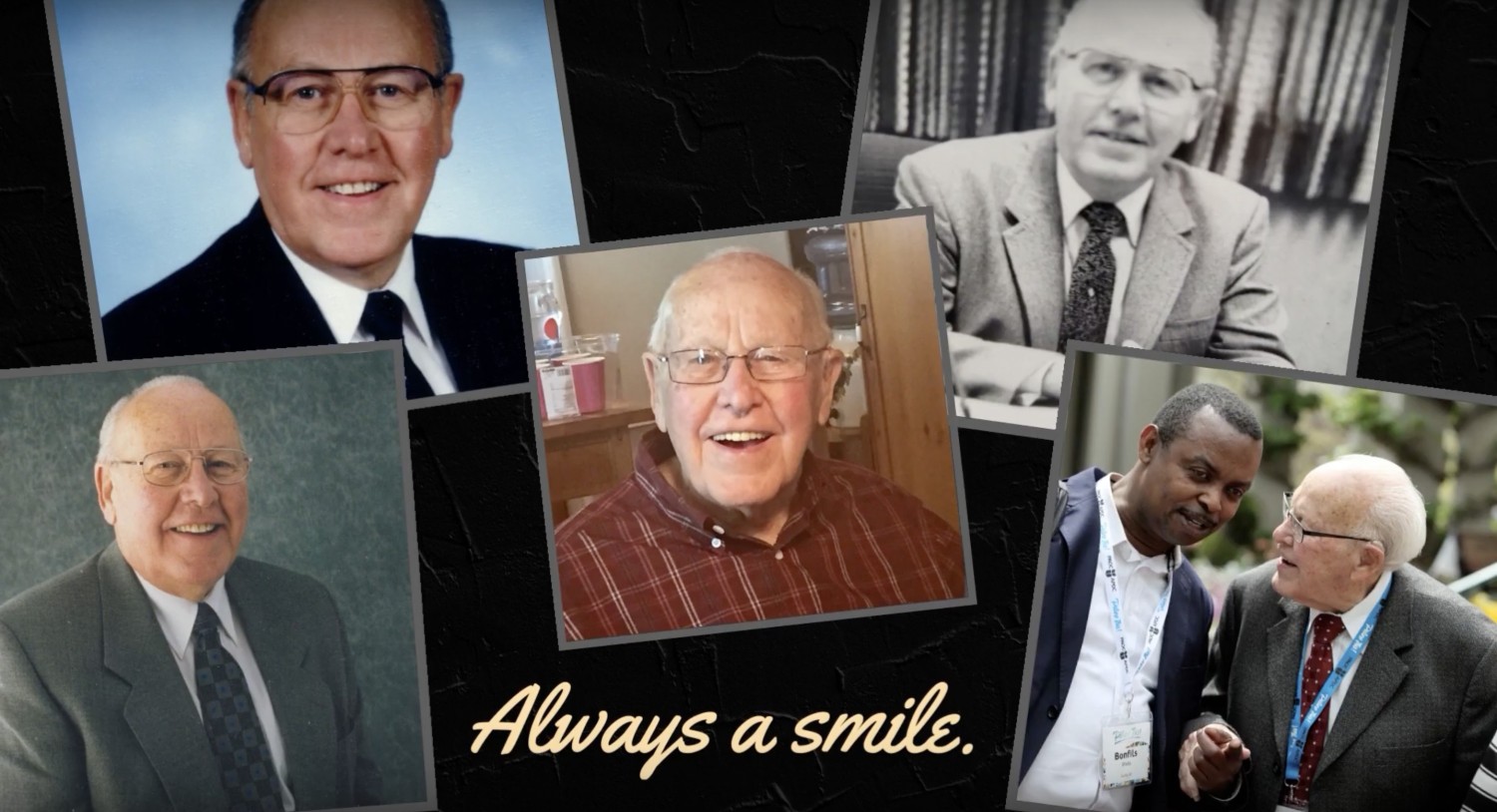 The Life of a Good Shepherd

Rev. Bob Taitinger was friendly in person, fervent in spirit, and fruitful in labour. Once you met Bob he always remembered your name. Bob was a good shepherd.

Bob Taitinger was a General Superintendent, the President of a Bible college and a pastor but he was dad first. He loved his family. He and Shirley prayed for each of their children, grandchildren, and great-grandchildren every day. The best gift a dad can give to his children is to love their mother. Bob and Shirley were married for 68 years.

His oldest granddaughter, Kristen, said when she was a child she  “knew he was a great man.” He spent time telling her that she was special and he loved her. He knew she needed to hear those words. Kristen said, “Papa taught us that God is always near. He talked about knowing the importance of the presence of God.”

Bob’s three children honoured his care for people. He was easygoing. Not quick to judge. He was a great listener. Bob was THE very best with names. He remembered my name after our first meeting. He cared enough to recall the specifics of what was going on in our lives.

Bob was an assistant pastor at Central Tabernacle from 1948-1955.

He was part of the first graduating class of Northwest Bible College (Vanguard College).

When Rev DN Buntain passed away, Bob was chosen as pastor of Central Tabernacle in 1955.

On October 4, 1964 he dedicated the 1,000-seat square building of Central Tabernacle.

In August 1968 he was elected General Superintendent of the Pentecostal Assemblies of Canada and served until 1982.

He was chosen as the President of Eastern Pentecostal Bible College in 1982 and served until 1993. 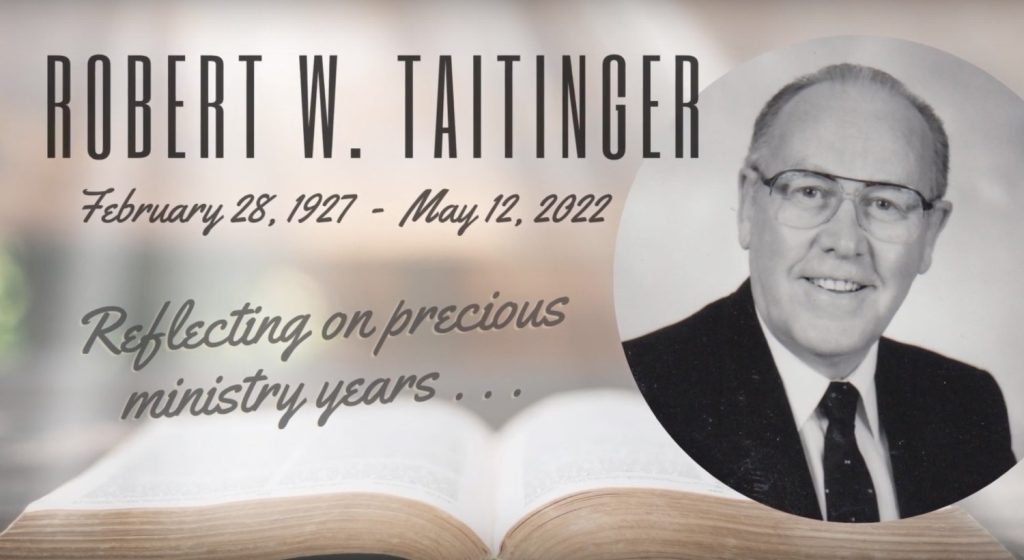 Bob said his favorite role was being a pastor in Edmonton at Central Tabernacle.

His eldest daughter Renae said, “Dad never felt adequate for the task before him.” Have you ever felt that way? I have. He humbly trusted the Holy Spirit for guidance. That was the secret to his leadership.

John Maxwell teaches about the “5 Levels of Leadership.” The initial level is position, and the highest level is personhood. Very few leaders reach the level of personhood. You simply can’t reach Level 5 unless you are willing to invest your life into the lives of others for the long haul

Bob was a fifth level leader.

When we became lead pastors at Central Tabernacle in 1994, Bob and Shirley connected with us. We were humbled to be in the role that they had once filled. All through our years of leadership they were supportive, caring, and willing to engage with us in a phone call or to meet us in Edmonton. It was important to Jocelyn and I to know that Bob and Shirley believed in us.

No time in our pastoral lives was more important than during relocation. We were relocating a congregation from the very building that Bob had built. The building he dedicated in 1964 was up for sale in 2004. All through the process Bob and Shirley were selfless supporters. He articulated his affirmation of us and the journey we were on.

In October 2017, long into a successful relocation, we invited Bob and Shirley to speak at the 100th anniversary of Central Tabernacle/North Pointe. Bob told a story he admitted he had never shared publicly. When he was relocating the church from the 108 St building to the 116th St building he faced unexpected and intense opposition from people that he loved. Two membership votes had to be taken before the congregation agreed to purchase the land.

Bob shared that he developed an ulcer because of the stress that he faced. He was at odds with friends. I remember sitting listening to him talk. In a way that only people who suffer similar trauma can understand, his pain was wonderfully comforting to me. It was easy for me to believe that good people could oppose me, never not Bob Taitinger. Shepherd leaders require love and resolve.

David Wells called Bob was a shepherd leader. A good shepherd leads, guides, and directs the lives of people under his or her care.  Pastors are to reflect the character of God. Jesus said, “I am the Good Shepherd.” Pastors stand in the gap. Pastor/shepherds lay down their lives for the sheep. For Jesus, the gap was a cross. Every pastor has a cross to bear.

A good shepherd lives out the genius of God. 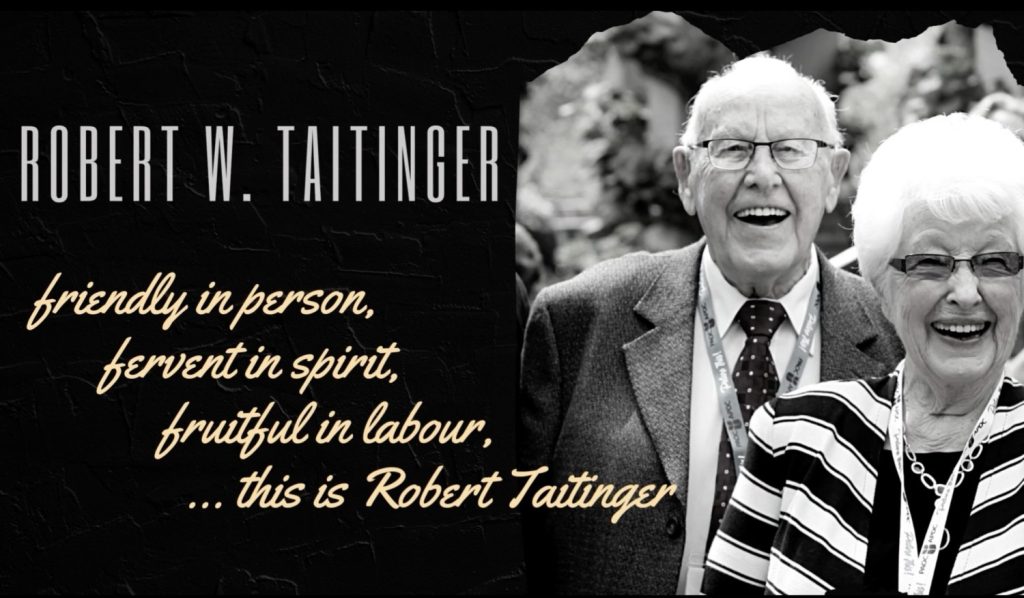 Our nation needs good shepherds. Most people don’t recognize that. Belonging to a church is losing its value. And with that the loss of the influence of a good shepherd. Our District Superintendent, Gary Taitinger, pointed out to me that over the last 11 years, church attendance in North America has steadily declined. At the same time, violence in North America was steadily on the incline. Coincidence?

Churches and shepherds are not perfect. The genius of God is to call women and men to lead, guide, and direct people through the counsel of the Bible. To be true to God’s written Word and God’s living Word. To be fully devoted followers of Jesus and obey his call to lay down our lives for those we love.

Thank you Bob and Shirley for being good shepherds.

Did you know Pastor Bob Taitinger? Please leave a comment at the bottom. Thank you.