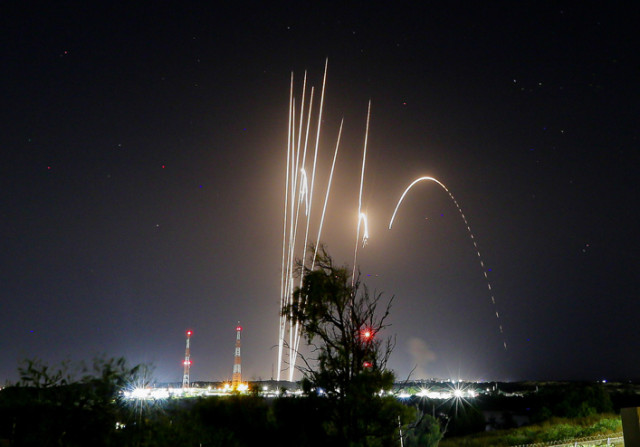 It’s now 8 a.m. in Israel as I type this. I am bleary-eyed and nervous. I second-guess every noise I hear. Is that the rumble of a garbage truck? Or is it Iron Dome? Is that a siren in a neighboring city? Or is it an ambulance or the noise of my kids watching TV?

Two years ago, Sharon Wiess-Greenberg and her husband, Ben, moved their sons, aged 7 and 11, from the US to Israel. They settled in Modiin, a small city between Tel Aviv and Jerusalem. Hundreds of Hamas rockets were fired in their direction last week. Most of them were intercepted by Iron Dome, the Israeli defense system.

As someone who grew up in the US, it feels very different to be in Israel as terrible news breaks rather than watching it on TV. It too is different, to actually feel your home shaking throughout the night and morning, as Iron Dome did its best to intercept the hundreds of rockets.

Sharon and all Israelis, know the recent violence with Hamas is different. As of May 16th over 3100 rockets were from fired from Gaza into the heart of Israel. That is the highest daily rate in history. Millions of Israelis lived in bomb shelters most of the week. Violence pitting Arabs and Israelis erupted in places Jocelyn and I have visited, The Temple Mount, the Damascus Gate, Tel Aviv as well as smaller towns.

Our friends Wayne and Anne Hilsden live in Jerusalem. On May 10th, thousands of Israelis, many of them school children, were celebrating “Jerusalem Day” just a 10-minute walk from their home. Sirens sounded. Explosions echoed. For over 38 years the Hilsdens made Jerusalem their home. They say this is the most dangerous time they have lived through. On May 13th, Wayne wrote, “God is our refuge and strength, an ever-present help in trouble. Therefore we will not fear.” Psalm 46:1-2

Those familiar with the Middle East use one word to describe the goings on: complicated.  (The Middle East: Its Complicated) I would add, tragic. Jocelyn and I are not “Israel: right-or-wrong.” Neither are we neutral. God loves Palestinians, Arabs, and Israelis.

Being in Israel made it possible to understand how 100,000 Muslims gathering at the Temple Mount is not an issue. Arabs and Jews are neighbors in many communities in Israel. They are both Israelis.  Jericho is an Arab community in the heart of Israel. During our three visits to Israel we heard only respect from our Israeli guide for Arabs and Palestinians.

God loves the people of Gaza. It is vital for people who stand with Israel and her right to self-defense to also have compassion on the Palestinian people in Gaza. They are suffering terribly because of Hamas and Islamic Jihad.

Israel supplies electrical power to Palestinian communities. In fact Hamas rockets intended for Israel fell short and took out three electricity lines, cutting off 250,000 people from electricity. The lines were among ten provided by Israel to help increase Gaza’s electricity supply. Hamas diverted power from a desalination station to use in launching their rockets. Palestinians went without water. A quarter of the Hamas rockets landed in Gaza killing Palestinians.

Hamas is an Iranian-backed, Palestinian terrorist group in Gaza  They are devoted to “the destruction of Zionist oppressors.” Terrorists’ willingness to be martyred – or to turn others into martyrs – is one of the reasons Islamic terrorism is so hard to fight. Hamas uses civilian population as human shields. They boast that Palestinians use their bare chests to protect their homes. Mobile rocket launchers are positioned beside schools, hospitals and mosques.

Hamas launches rockets at random, civilian targets from behind human shields. Sixteen year old Nadine Awand and her father Halil died last week. They were Arabs living in Israel, killed by a Hamas rocket. For whatever its faults, the Israeli Defense Force (IDF) works to avoid civilian casualties by flooding Gaza neighborhoods with cell alerts before attacks. We see innocent people killed. Its a win-win for Hamas.

The recent violence results in large part because of political infighting between Hamas and Fatah, two Palestinian parties, vying for power among Arabs in Easter Jerusalem.

Hamas achieved what it called for in statement after statement in recent years: unity through hatred. Fear and rage unite communities from Lebanon, Jordan, the West Bank and even inside Israel against the State of Israel.

Israel must demonstrate that despite the changed international environment Israel is not defenseless.

Don’t settle Lisa Laflamme’s soundbites to understand what is happening in Israel.  You owe it to yourself to do some research.

Winning the current war against Hamas is not only about denying the terrorist army’s ability to target Israel with thousands of missiles at will every few years. A critical part of Israel’s purpose in this conflict is proving that the Jewish state retains freedom of military action against its enemies.

We pray and hope for peace over this whole region as soon as possible.